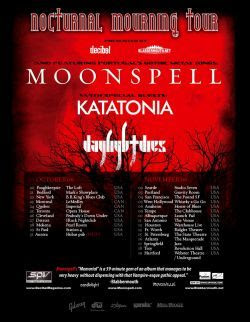 Last night was my second time seeing Katatonia - the first time was at the infamous Milwaukee Metal Fest in 2000. I've been to the Chance in Poughkeepsie before, the last time 10 years ago for Napalm Death. At the time, I thought it was a decent venue. This show, however, was at "The Loft" at the Chance. In other words, it was in the attic. Frankly, this was the worst venue I have ever been in, and I have seen many dives. It made old Coney Island High look like Radio City. There was no actual backstage area - the bands were sitting on a couch eating pizza and drinking beer in a roped off area at the back of the floor. It was totally depressing.

I won't comment on the local bands that came on first. I've never seen or heard Daylight Dies before, but they were fantastic. They fit really well with the other bands on the tour, and I think they did a great job of getting people interested in their music. I know I'll check them out, after this.

Anyway, it was weird seeing the guys in Katatonia have to set up their own equipment. The ceiling in this place was about 7 feet tall, and the guys on the stage practically hit their heads on it. While setting up his drums, I saw Daniel absolutely nail his head on one of the speakers hanging from the ceiling. The soundcheck was horrible and unprofessional. Anders had a seriously hard time tuning his guitars. Does this all sound horrible? I thought it was. Thankfully the band didn't lose their cool, and they acted totally professional throughout, even getting in a few laughs at this sad place.

Katatonia were awesome. Great set, decent sound, and a fantastic performance. Again, since the venue sucked, Katatonia had to play a relatively short set. Among the songs they played, if I remember correctly, in no particular order, were: Leaders, Soil's Song, July, Ghost of the Sun, Evidence, Teargas, Sweet Nurse, Deadhouse, and of course Murder. I may have missed a few, and if anyone has the full setlist, I'd appreciate it.

The crowd was totally into it, singing along with every song. I thought it was a pretty good showing on the crowd's part, and the band seemed pretty happy with that. In spite of the venue's shortcomings (pun intended), this turned out to be a great show.

One last comment, directed towards the Chance: you know your venue is horrible when the crowd starts a “Loft Sucks” chant. Someone yelled to the band, “America only gets better from here!” Damn straight...