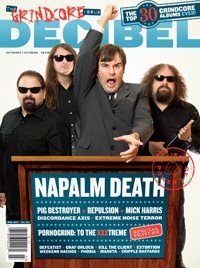 The Napalm Death feature in Decibel made me feel all warm and fuzzy. I was reminiscing about the first time I saw them, on the 1996 tour (13 years ago!? forshite!) for Diatribes, at the Chance in Poughkeepsie. My friend Josh and I showed up an hour before the show, before anyone was even there. The doors were open, so we just walked in. The guys from Napalm Death were playing pool. They asked us to play with them. When they heard how old we were, Barney went on an almost unintelligible tirade about how stupid it is that we can vote and die in war but can't legally drink in the US. So he bought us beers. I still have the signed ticket.
Decibel Napalm Death The Chance