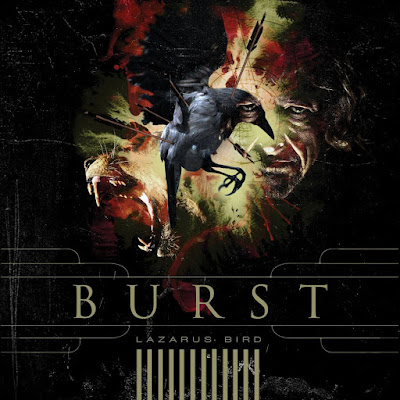 Lazarus Bird rocks hard. I'd never listened to a Burst album before. After a short and tense profile in Decibel (by Cosmo Lee) and a lackluster review, I had no reason to check out this band. Then Chronicles of Chaos came along and gave it a perfect 10. I had to investigate. Trust no one.
On this album, Burst stomp all across the metal landscape. It brings to mind Mastodon, Isis, Opeth and even Katatonia, but none of those comparisons would do the album justice. Musically, Burst categorize themselves as "Metal/Progressive/Experimental" on their myspace page. Wikipedia confidently asserts that they are a "metalcore" band. I think the issue lies in even trying to categorize this. You just have to listen. Burst thrash, chill out, prog out, break it down, and even whip it out Maiden style on this album. I think it all comes together convincingly and never bores me for a moment.
Shawn Bosler's review in Decibel took issue with the singing. Linus Jägerskog's lead vocals range from standard hardcore yelling to Mastodonic bellowing. The "clean" vocals, performed by guitarist Robert Reinholdz, will surely raise an eyebrow at first. After a few listens, though, I came to find the Jello Biafra meets Jonas Renkse warbling convincing and endearing. It works for me, at least.
Did I mention Burst are from Gothenburg, Sweden? It's irrelevant. If you can dig the vocals, I highly recommend this album.