Posted by atanamar February 09, 2009
"TALK IT THROUGH, GAIN INSIGHT" 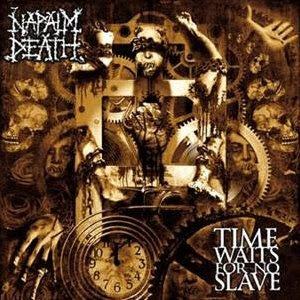 When I get a new Napalm Death album, I like to crack open the lyrics and read along while I'm listening. While rocking out to Napalm, I always envision Barney delivering his lines in a live setting. The man is a living typewriter on stage, moving his head back and forth as if he's reading a giant, imaginary teleprompter.
For Napalm Death, the medium is the message. Here, Barney and company have moved on (just a little) from the scathing barrage on organized religion that was Smear Campaign. In a direct or artfully veiled manner, topics include the bankrupt institution of marriage, working too hard without stopping to smell the roses, global warming, free speech, governments' use of torture, and awesomeness.

"IT'S TIME NOW TO STEP BACK AND FIND AN INNER PEACE"
Time Waits For No Slave closely follows the rejuvenated style we've seen since Enemy of the Music Business. In other words, it rules. Slight edges of experimentation have slipped back in, mostly in the form of chanted, semi-melodic background vocals or odd bits of guitar melody. This all melds perfectly with the crushing grind. Mitch Harris and Shane Embury somehow continue to churn out memorable and unique riffs while Danny Herrera alternates between complicated rhythms and comforting blast beats.

"LOVE IS LIKE THE LAST DAY YOU'LL EVER LIVE"
Napalm Death have always been an acquired taste, even in the metal community. I personally am prone to Napalm binge listening. I sometimes need to pop on 7 or 8 Napalm Death albums in a row just to get through a work day. One of their albums is good for about 300 mg of caffeine.
People (music writers) always want to play the game of ranking a new Napalm Death album in relation to their vast back catalog. I like all of their albums, even those from the oft-maligned "experimental" era. I'd say all of their albums are their best album.

"EXACTLY WHAT ARE YOU ACHIEVING?"
In the end, Napalm death are a band I can get behind and support. Time Waits For No Slave crushes. I'm eagerly waiting for them to announce all the dates for their upcoming North American tour.