I'm incredibly psyched that Decibel has finally inducted Suffocation's Effigy of the Forgotten into their Hall of Fame in the May 2009 issue. I think that Suffocation's influence and impact on the trajectory of death metal has been largely glossed over in journalistic circles.

The album is absolutely massive and crushing. I've always felt that it was the Death Metal Vulgar Dislplay of Power. Technicality and wankery were well established themes in metal by 1991, but Suffocation took those skills and brutally directed them into the pit, New York style. This is music to mosh to, plain and simple.

Effigy of the Forgotten shares stylistic elements with Napalm Death's Harmony Corruption, which came out the year before (and was also produced by Scott Burns). In the Decibel article, they specifically cite Napalm Death as an early influence on their sound. The grindcore aspect of Suffocation's music, along with a healthy dose of hardcore, are what set them apart from the death metal of the day. 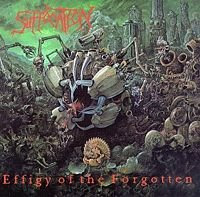 It's interesting to hear the band talk about their Morrisound experience, as that era of album production is now generally maligned. They recount how Scott Burns replaced each kick drum in the mix with a sampled kick drum, by hand. That explains a lot about the sound of the album, which I always thought was fairly sterile. Suffocation re-recorded songs from both their Reincremation demo and Human Waste EP for Effigy of the Forgotten. I've actually always enjoyed the Human Waste EP more than Effigy of the Forgotten. The songs sound more organic to me, and I think Mike Smith's drumming is better showcased there in it's raw form. Spotty production has always been an issue with Suffocation's albums, barring the completely insane Pierced From Within(which should also be in the Hall of Fame). Breeding The Spawn really was the low point in that regard. 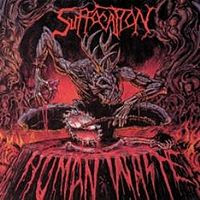 At the very least, the article was a good occasion to pull out my old Suffocation CD's and celebrate their entire collection. They truly deserve the honor.

Decibel's Hall of Fame articles really are a fantastic thing. They read like a living history of the best metal ever put out. A lot of times, I've never even heard the album they're inducting. That's a good thing - there's always more metal to check out.

Suffocation will be out on the "Blood Apocalypse Tour" in March and April, and should have a new album coming out this year.
Decibel Suffocation