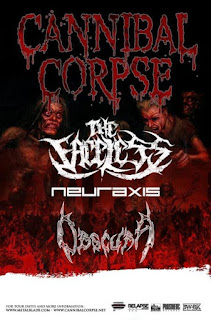 Yes, I missed Obscura. I called the Chance in the afternoon to find out the set times, and they told me that the inevitable local band would start off the show at 8:00. I got out of work, raced home and then drove like mad up to the Chance. When I got there, I found out that the local band was a no show, that Obscura had gone on first, and that I'd just missed their set.
I was seriously mad. When Neuraxis came out, shortly after I got there, I was still simmering. It didn't take long for the music to channel that anger in the right direction. Neuraxis are pretty fantastic live. Alex Leblanc is a man's front-man. The dude is seriously animated and totally serious.
The sound wasn't so great. A bit of the nuance and melody of the guitar work was lost in the mix, but the the crowd didn't care. The Chance was packed and the crowd was raging. It was a sharp contrast to the last concert I attended. The Chance has its regulars, and tons of kids come to the shows. The pit was whirling and the hair was flying. This is what metal is about. My anger, and any other thought in my head, fell out with gratuitous headbanging. I'm only really familiar with the songs off Neuraxis' latest album, The Thin Line Between. It's a great album. Most of the set came from that release, and the songs sounded great. Tracks like “Wicked,” “Versus” and “Darkness Prevails” absolutely destroyed. Neuraxis had to play without a bass player, as Yan Thiel was stopped at the Canadian border. It only seems to have made the band more pissed off. Alex Leblanc looked like he had enough energy to drop and do push ups between songs. Excellent performance. Neuraxis are a seriously underrated band.
With a bit of alien ambiance, The Faceless came out and absolutely slaughtered. This band are a xenomorphic machine. The sound, amazingly, was perfect. It was the best sound mix I've ever heard a the Chance, in fact. Almost the entire set came off of their new album, Planetary Duality. If I haven't raved enough about this album, let me know. It rules. Vocalist Jeff Ventimiglia stalks around the stage like, well, a stalker. The dude has a very Unabomber thing going on. It's fairly creepy, but it works.
Michael "Machine" Keene is clearly a new entrant into the pantheon of guitar gods. The man is unbelievable. He made the sweeping calisthenics of the songs and solos look like child's play. Somehow the band pulled off the complicated arrangements with ease. The crowd was very much into it, and did their best to figure out how to mosh to some of the absurd time signatures. It was kind of funny at times. “Prison Born” melted brains and “Xeno Christ” melted faces. “An Autopsy” was the lone representative of The Faceless' first album, Akeldama. I had a great time.
In this month's Decibel, Nile's Amongst the Catacombs of Nephren-Ka is inducted into the hall of fame. I vividly remember ordering that album in 1998, sight unseen, based on raving reviews. Can you believe that's how we used to buy albums back in the day? That album kicked the death metal scene in the balls, and turned it on it's ear. Nile then went on to tour without stop in support of Catacombs. To me, Planetary Duality is the modern equivalent. Kids, this is the new shit. Take notice. I'm excited to see these guys again, opening for Atheist in July. Like Nile, though, The Faceless need to work on their stage presence a little bit. They could do a bit more as a band to work the crowd. It will come with time.
I'm still bummed that I missed Obscura, but I'm consoled by the fact that they will be headlining the “Relapse Contamination Tour” in May. I won't have to wait long.
And no, I did not stay for Cannibal Corpse. I explained my reasoning on that here. It's unbelievable the crowd these guys can still draw. They are a veritable cottage industry. If a band's merch table can support it's own line of women's underwear, then they've crossed some line that I can't even comprehend. Would you wear Cannibal Corpse underpants?
Cannibal Corpse Neuraxis Nile Obscura The Chance The Faceless