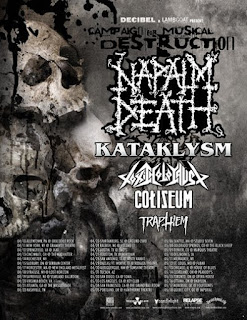 This was a very weird concert experience. I flew back into New York late Saturday afternoon, and made haste to get home and head to the venue. I met up with my brother Frank and got to the Blender Theater in time to catch the end of Kataklysm's set.
This is the second time I've been to the Blender Theater. The first show I saw there was The Reverend Horton Heat. Although not a metal show, I thought the sound was decent. The space, however, is pretty bizarre. It's basically an old movie theater. The stadium seating remains, but the floor in front of the stage is cleared out. The floor of the "pit" is slanted down towards the stage, making for awkward standing. I was pretty curious to find out how this would work for a metal show.
I've seen Kataklysm a couple of times before as openers, but never got into their music. They sounded pretty good, and the crowd was pretty into it.
Mere minutes after I arrived, Napalm Death came out. The sound was pretty rough at first, but it improved after the first song. As usual, Napalm completely raged, and sounded fantastic. They started out with an array of songs from their last three albums. This was the second date of the North American tour. In a couple of spots, you could tell that Barney and Mitch Harris hadn't completely hammered out the details of the vocal duties on the new songs. No big deal.
By this time, I think some of the crowd had left. The bill was pretty diverse, and it seems that some of the thrash folks left after Toxic Holocaust, and some of the traditional death metal folks left after Kataklysm. So be it. A lot of people also seemed to be sitting in the seats up above. Maybe on the whole, Napalm Death fans are just old. Either way, the situation on the floor was kind of strange. There were people up against the stage, maybe 2 or 3 deep, and then a gigantic wide open circle in the middle of the floor. Folks made liberal use of the open space for a nice circle pit, but in the end it felt like the crowd was very sparse. The tilted floor caused many a spill in the pit, but folks seemed good-natured about it.
It was one of those shows where a song ends, and the crowd cheers for a few seconds, then it dies down, and then there is complete silence while the band tune up. Every drunk and heckler can be heard, and it's pretty awkward. It was just a weird situation. This is New York, and this is Napalm Death, but it was a dead crowd. I was disappointed.
After a few songs, things got weird. Barney announced that he'd smashed his finger on Shane's bass, and that he thought he'd broken it "for the third time." Ouch. But Napalm soldiered on. Classics like "Unchallenged Hate" and "Suffer the Children" sounded fantastic and seemed to get the best reaction from the crowd. The set took an old school turn with the obligatory group of super short tracks from Scum. "It's a M.A.N.S World!," a rarity off From Enslavement to Obliteration, sounded great.
The new songs were particularly strong. "On the Brink of Extinction" is just incredible live, and I get the feeling that it will be in Napalm's live set for a long time to come.
After about 45 minutes, a conference occurred on the stage, and Barney announced that they had to cut their set short. It was unclear if this was a decision of the venue, or if Barney's injury was the problem. By this point, his finger looked like a giant purple sausage. Either way, the band blasted through "Mass Appeal Madness," "Nazi Punks Fuck Off," and "Siege of Power," then left the stage. No encore.
I got the final dose of weirdness on my way home from the show. I bought a tour shirt, as usual. I can't help myself, and it's really the best way to support the band. On the train, I pulled out the shirt to admire it. Unfortunately, I realized that the tour dates were misprinted. For the second date of the tour it says "04.11 YORK, PA." That's funny, I don't remember visiting Pennsylvania Saturday night. Ugh.
All told, it was a great performance. It's a shame they had to cut their set short, and it's a travesty that the crowd was so tame. I hope Barney's finger is alright. It's a long tour, and emergency room visits in the U.S. aren't quite as free as they are in the U.K..