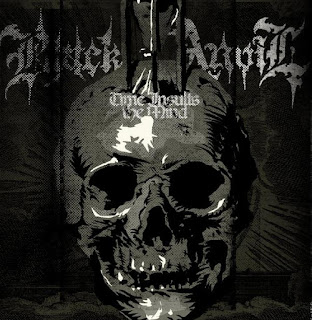 Black Anvil answer the essential question: what would Immortal have sounded like if Abbath had grown up in Brooklyn instead of grim and frostbitten kingdoms? What if Abbath grew up listening to hardcore instead of Motörhead? Time Insults the Mind is a giant plate of baby back riffs, informed by hardcore but drenched in blackened thrashy goodness.
Time Insults the Mind came out in November on Monumentum Records, but the band recently signed to Relapse. The album will be re-issued this fall on the new imprint. That's enough for me to decide to check it out.
Formed by members of the hardcore act Kill Your Idols, Black Anvil have been met with various accusations of not being TROO KVLT. Black metal is nothing if not pretentious at heart. Was anyone delivered from the womb in perfect corpse-paint? Did you grow up listening to nothing but Bathory? Black metal is something many metal fans come to later in life, and that's fine with me. Time Insults the Mind is a tight, accessible and extremely listenable metal album. It brings to mind the grim chills of Immortal and the determined arrogance of Satyricon. Throw in some Motörhead vibe just for fun. All this with doomy elegance and a surprising cohesion.
“Margin for Terror” starts off the album as a bold mission statement. Sweet thrashing riffage is seasoned with tremolized ambiance and blackened vocals. Goddamn, this rules. “On This Day Death” gallops with convincing fury. “And You Thought You Knew Pain!” crawls along with a simple but perfect riff that reminds me of the understated glory of Carcass' Swansong. “777” sports a melodic riff that will stick in your head like an axe. I was going to bitch about the last track, “Dethroned Emperor,” not sounding as good as the rest, and then I realized it was a Celtic Frost cover. Ha!
Paul Delaney's croaking is excellence. The bass is strong and high in the mix – something you'll rarely find in this style. Gary Bennet's guitars have a perfect tone and speak in tongues that Satyr would envy. This isn't any crazy technical shit – it's just riff after riff of awesome riffery. At least that's what I think. Raeph Glicken's drums swing between groovage and speed with ease, tying together the whole package nicely.
I don't know why, but this album is making me more excited for the new Immortal. The stripped down, thrashed out and riff laden feel of Time Insults the Mind would make Abbath proud. Abbath is a pretty nice guy. When he's not in corpse-paint, he fronts a local Motörhead cover band. Surely he'd appreciate some hardcore dudes who can churn out a thrashy, doomy black metal masterpiece. I can see a bright future for Black Anvil. Check it out.