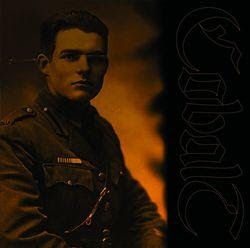 I've been sitting on this one for a while. I wrote an entire review and threw it away. This is an important album, but it's difficult to describe. Gin is American black metal that is transcendent of the genre. It's spirit is somehow more genuine than most anything labeled "black metal" in this day and age. At the same time, Gin actually embodies something American that is hard to quantify. Cobalt is made up of Phil McSorley and Erik Wunder. I encourage you to read this excellent interview with them to get some insight into their world.
Gin starts off with some innocuous clean guitars, and heads into some filthy riffage. The guitar tone is excellent. You won't find triggers, blast beats or walls of sound here. The drumming is savage and has a barbaric Keith Moon feel to it. McSorley's vocals are animalistic and satisfying. I feel a comparison could be made to Grutle of Enslaved, but McSorley emits more of a sense of madness and agony in his screams.
The second song, "Dry Body," takes us in a completely different direction. Clean guitars accompany Erik Wunder's amazingly deep, clean vocals. His voice makes me think of Phil Anselmo at his most lucid. The clean vocals continue in a semi-chant along with some fantastic distorted riffage. The guitar work is primitive, crusty and bluesy. There is some small corollary here to Satyricon's recent guitar sound, but Erik Wunder has infused that blackness with more soul than Satyr could ever manage.
Gin soldiers on with a marshal spirit, constantly displaying an eclectic but cohesive synthesis of influences. I really enjoy this album. The dynamics do well to maintain interest and the cacophonous crescendos frequently induce involuntary headbanging.
Gin is not without flaws. There are a few moments where a repeated riff will drone out and lose me. It's a small gripe compared with the amazing uniqueness of the whole package.
The nearly 10 minute long "Two-Thumbed Fist" is a stand-out track for me. There's something progressive here that eschews the usual Provolone associated with progress in metal. The spirit of black metal remains, but all it's trappings fall away to reveal something that truly rocks.
Amazingly, one of the most memorable songs on the album isn't even by the band. There is a hidden track that Erik Wunder claims is an early 1900's field recording of a Negro spiritual, sung by an African American chain gang. The track is haunting and absolutely astounding. To me, it's worth the price of the album on its own. It takes a gigantic pair to tack something like that on the end of a "metal" album. But that is the genius of Gin.
And yes, that's a young Ernest Hemingway on the album cover.