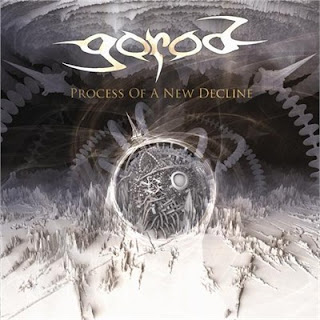 There seems to be a backlash right now against the ongoing revival of technical death metal. The criticism usually runs along the lines of "it's wankery," "it's pretentious," or "they don't know how to write songs," and so on and so forth. For the most part this is all true. The bands that have risen above the sea of wankery, at least for me, exhibit a few key attributes. First there has to be some kind of soul to the music. Second, there needs to be some ability to channel arpeggiated calisthenics into compelling melodies. Third, well, see the above criticisms. Oh, and I prefer the lyrics to ponder aliens, astrophysics, quantum physics or robots. That's not pretentious, right?
So here come Gorod (formerly Gorgasm), from Bordeaux France, sailing on the technical seas of cheese. They totally float my boat.
There is a whole lot of shredding here, and dueling arpeggiated calisthenics aplenty. Three things tie it together for me. First, the melodies have well planned destinations. The meanderings have a beginning, middle and end that I find pleasing. Some of the tunes and solos are downright haunting.
Second, there is a fantastic grooviness here. Some very nice rhythms are on display. The drumming has an appealing, organic feel that lays off The Faceless style triggers (not that that's a terrible thing.) The drummer Sam tends more towards a Mario Duplantier vibe. The bass is pretty spicy in the mix and keeps it sharp. There is some excellent riffage along the way that keeps the ship moving. The crazed hammer-on action really works well with the rhythm section.
Lastly, I totally dig the vocals. Singer Guillaume reminds me a lot of Alex Leblanc from Neuraxis (it's a French thing). Mid-to-low range death grunts suit me just fine and ground the music in a more traditional death metal vibe than some contemporaries in this genre. Occasionally there is an inhumanly low brown-note of a growl that blows the mind. The lyrics are appropriately esoteric.
I expect that this album will do quite well when it's released in the U.S. by Willowtip (on July 28th). I guess the question for Gorod is whether they can ride the tech death wave to success. Or has the wave already crested? I hope not. A spot on the Summer Slaughter tour would have nailed the target audience.