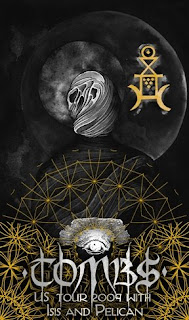 Every time I go see Pelican, Trevor de Brauw is hanging out at the merch table. He's an incredibly cool dude. this time, he helped me decide what size t-shirt I should buy. I claimed to be feeling like a fat-ass on this evening, but he convinced me that my breakfast (Kashi) qualified me for the smaller size. We'll see about that.
Tombs came out in cacophonous fashion and started out with a song I didn't recognize. It might have been new material, but it sounded more primitive than any of their recent work. A steady flow of songs from Winter Hours followed. This album has grown on me tremendously and is quickly becoming one of my favorite albums of the year. "Gossamer" sounded great live. Epic stuff. The crowd was almost completely unmoved by Tombs, which is a shame. I suppose they're more "extreme" than Pelican or the headliner Isis, but folks just kind of seemed befuddled. I was almost alone in the compulsion to bang my head.
Mike Smith very much reminds me of Mike Ness on stage - the way he slings his Les Paul and the way he stands. Because, you know, that's pretty fucking awesome. Drummer Andrew Hernandez went absolutely King Kong behind the kit. When I reviewed Winter Hours, I had a gripe with the rhythm section. I'm still not exactly sure what they're doing, but it sounded cool live. "Beneath The Toxic Jungle," "Seven Stars The Angel of Death" and "Filled With Secrets" were further highlights of an excellent set. Short but sweet.
Seeing Pelican is always a religious experience for me. When they started out with "Far From Fields" from City of Echoes, it was an epiphany. The sound was excellent, as far as Irving goes. The band was rocking and the packed crowd seemed to feel it. As always, Laurent is a fucking bobblehead. The man could be playing the daintiest riff and his head will be banging like mad. Pelican are out supporting their new EP, Ephemeral. I've been rocking out to it quite a bit. They managed to play both new songs - "Embedding the Moss" and "Ephemeral." Both sounded awesome live. They even played the Earth cover-song from the EP, "Geometry of Murder." The crowd seemed to respond well to that one. "The Woods" from their first (self titled) EP closed out the set in rocktastic fashion, and even incited a makeshift pit. Nice work.
Isis hasn't interested me much since Oceanic, and Wavering Radiant inspires me only to fall asleep. This show started weirdly late (9:00), so I decided not to stick around for Isis, even out of passing curiosity. Past my old man bed-time on a work night.
All told, it was a great show. And think - Irving Plaza security didn't even try to make me throw out my umbrella.
Irving Plaza Isis Pelican Tombs