Revocation - The impact of a band photo

Posted by atanamar July 14, 2009
So I'm checking out Empire of the Obscene, the very awesome debut album by Revocation, from Boston, Massachusetts. The album is a fantastic technical thrashy-deathfest. I go to look up the band on Encyclopaedia Metallum, and the first thing I see is this band picture: 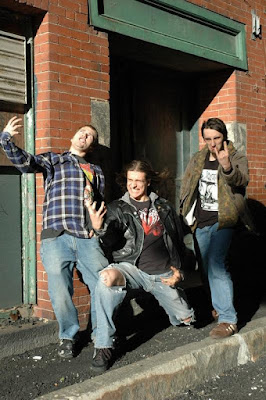 This instantly makes me think that Revocation will be completely awesome. These guys look like they rule and don't take themselves at all seriously.
It got me thinking - so much of metal is wrapped up in image, whether we like it or not. From the long hair to the corpse-paint to the mandatory extremely-serious band photos, the history is well documented. But in the end, how much does a band's image effect our opinion of them?

I should note that Revocation do in fact rule, and have signed to Relapse. Cosmo Lee recently discussed them here.
death metal Revocation thrash