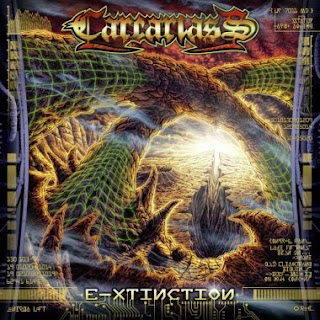 The Fucking Champs fucking rule. They shred and thrash with complete ease. But they never take it seriously - that's the beauty of the shtick. Carcariass illustrate would happen if The Fucking Champs were deadly serious about their metal.

Encyclopaedia Metallum lists Carcariass as Technical Death Metal, but that's a stretch. E-xtinction sounds to me like a modernized NWOBHM album with soaring solos, bouncing thrashy grooves and heart stopping melodies. As with many good things in metal right now, Carcariass hail from France.

The vocals are a sore thumb. Four tracks feature "death" vocals, and they couldn't be more out of place. Raphaël Couturier's mid-range growlings stick like glue to his bass lines, and are really just superfluous. The band prove this very point by including instrumental versions of the four songs with vocals. These tracks work perfectly well without the guttural interruptions, so why even bother?

"Exulting Pain" features riffs and melodies that could be left over from Powerslave. "In Cold Blood" has all the riffs that Jon Schaffer of Iced Earth has been dreaming of for a decade. As with The Fucking Champs, Carcariass make it seem easy. Your band should be embarassed of your shoddy riffage. Master-level metal riffs grow on trees in Besançon. Dave Murray and Adrian Smith should listen to "Revenger" to find that lost mojo.

"Domination" starts our with a bass line that recalls the glory days of Athiest. There are a few occasional moments of progginess, but that's not the general idea here. E-xtinction is a fucking clinic on the meaning of heavy metal. The album incites an immediate physical reaction in me - it demands much banging of the head. It is a beautiful edifice to the Olde Schoole.

The production of the album accentuates the leads and melodies. The drums and bass are excellent and sit nicely in the wide open soundscape. The guitar tones of the solos vary quite a bit, which is entertaining. Pascal Lanquetin and Jérôme Lachenal are pretty much inhuman.

The bottom line is that Carcariass are metal. If you ditch the tracks with vocals, E-xtinction should appeal to a wide audience of fans. If you like the Maiden, the Iced Earth or anything in between, you should check it out. If you dig The Fucking Champs, Carcariass are your boys. In the end, there is just about nothing trendy here. Excellent.