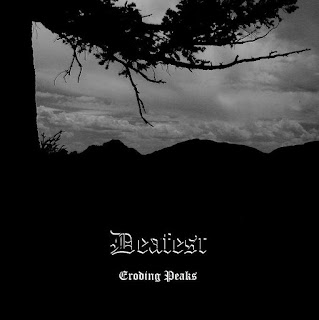 I'm totally blown away by this album. Eroding Peaks is an aesthetic vision made complete. Deafest have found their voice, or rather lack thereof. Gone are the black metal vocals. The drum machine is replaced by the excellent drumming of Brett from Severnaya. The result is fantastic.

The ambient, melodic black metal shtick is married here with the bombastic movements of Mono(Japan). It's like taking the meaty bits out of that music and blackening them on the grill. At the same time, these songs dispense with the long waits and slow builds. This immediacy comes along with killer melodies that hail from the Justin Broadrick school of emotional impact. The black metal vibe continues akin to Wolves In The Throne Room. The difference is that Eroding Peaks delivers less drone, more dynamics and wall to wall riffage. A healthy dose of Weakling's majestic triumph helps this thing along. Deafest make this look too easy.

Make no mistake, this is a self produced album. It sounds raw, but there's something genuine here that's enhanced by the minimalistic production. The overarching theme is still a reverence for nature and man's disregard for it. I think the purely instrumental format does justice to that idea.

Deafest mastermind Chase again manages to churn out riffage that simultaneously conveys majestic visions and grim misanthropy. After several self-released splits and a previous full-length, I'm starting to recognize the guitar tone here as distinctly Deafest. The drum sound is simple, organic and satisfying. Brett rides, blasts and grooves nicely alongside the rapid picking and acoustic passages. It's completely outlandish to hear someone playing drums on a metal recording without triggers, samples and pro-tooled precision. I totally dig it.

Eroding Peaks is still truly black metal, but surely isn't confined by the genre. By dropping the agonized, screeching vocals, the audience is certainly widened. If I play black metal on my home stereo, my wife's usual reaction goes along the lines of "what is this shit?" Playing Eroding Peaks elicited the surprising response of "this sounds pretty good." I'll take it.

I think this is an excellent album, if only too short. Maybe you'll disagree with me. Since the band have made it available for free download here, you've got no excuse not to check it out. Tell me I'm wrong. Until then, I'm going to go celebrate "Where Gnarled Bark Still Stands."

You can order the album here.