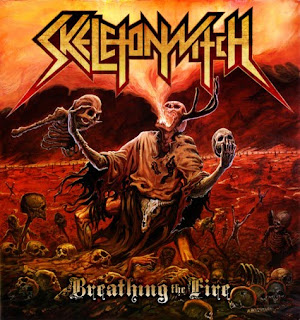 I've been Breathing The Fire for a couple of weeks now, and the new Skeletonwitch is definitely a burning, spicy, molten feast of metal. I can't get enough. Boatloads of ink have been spilled trying to describe the Skeletonwitch sound. I think the most commonly used adjective is "old school". It's still the most appropriate. Their Myspace page says that Skeletonwitch "sound like Bay Area Thrash and NWOBHM with elements of Black and Viking Metal." That sounds about right to me.

When I threw on the album for the first time, Breathing The Fire instantly made me think of Megadeth's Peace Sells. The riffage on "Submit to the Suffering" and "Longing for Domination" brought to mind the completely unhinged spirit of "The Conjuring," "Good Mourning/Black Friday" and "My Last Words." That's a pretty impressive compliment. Breathing The Fire doesn't reach the iconic nature of Peace Sells, but it really is a massively entertaining treasure trove of riffs.

Beyond the Permafrost was an awesome album only occasionally marred by leads that couldn't keep up with the rest of the barreling war machine. That problem is completely rectified on Breathing The Fire. Nate Garnett and Scott Hedrick seem to have perfected the delicate balance between speed, chaos and shredding. In addition, the band's songwriting skills have improved quite a bit. I can tell all of these tracks apart. The choruses and riffs are floating around in my head constantly. There is perhaps less melodic death and more thrash on Breathing The Fire. But why even try to parse our the pieces? Skeletonwitch have forged their own sound from all the best parts of old school metal. This shit just rules, hard.

Chance Garnett seems to have upped the ante with his vocals. The sometimes black, sometimes death screaming has an undeniable and unique character. Every song has a memorable chorus or some line that you'll undoubtedly yell along to.

The production is guitar-centric, and appropriate to the music. I do get occasional twinges of regret about the guitar tone. I sometimes wish it had a bit more crunch, but it doesn't really harm the overall experience. I can balance that out in my head with the relief that this isn't an over-compressed shit-fest. The drums and bass gets ample space, and propel this thing along at ludicrous speed. Breathing the Fire never stops moving. That would be a bad thing if it weren't driven by a myriad of fantastic rhythms.

The melodic guitar sections on Breathing The Fire are probably more subtle than on the previous album. There's still plenty of melody, but I think it's used to greater effect on these tracks. "Stand Fight and Die" is positively anthemic.

From what I hear, Skeletonwitch are absolutely amazing live. I've not yet had the pleasure of seeing them in person, but I plan on remedying that in October when they play with The Black Dahlia Murder at The Chance.

So yes, this album fucking slaughters start to finish. I'm quite sure it will be on my year-end list. I can't stop listening to it.

Breathing The Fire comes out on October 13th.