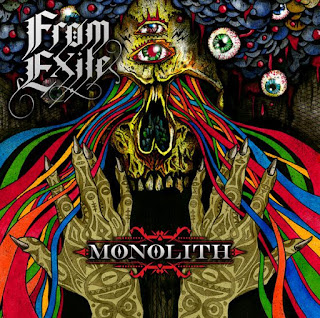 From the opening notes of "Arrival," you might be inclined to categorize Monolith as melodic death metal of the highest caliber. That is, if there were a shred of death metal vocals to be found. But there aren't. Instead, Atlanta's From Exile present us with a metal album that melds the aggressive soul of melodic death metal with an emotive progressive spirit.

The guitar riffage is superlative, with an upbeat vibe a la latter day Soilwork. With the first soaring lead lick, you know this is going to be a fucking shred-fest. Impressive keys chime in from time to time, taking on multifarious roles.

The vocals appear for the first time in the second track and are actually only featured in three songs. Highly processed and distorted, it takes a few seconds to comprehend the fact that you're hearing a human voice. From there, the singing starts to become more clear. I really like these vocals. I don't see any particular reason to occlude and distort them, but they fit in nicely with the tunes. The singing reminds me of the clean vocals on The Faceless' Planetary Duality, which I love. Maybe shades of Symphony X's Russell Allen? Can't go wrong there.

"Impure Visionary" continues with an absurdly good classical guitar interlude. Then we get into a soaring, narsty solo. Hot damn, I'm getting vibes of Cynic, Opeth and Dream Theater. Leads here and there evoke Marty Friedman back in the day. Did you have any of his preposterous solo albums? I sure did. I sometimes pop in Introduction (1994) to reminisce, but that's beside the point.

There is lot of synthesized sound on Monolith, both keyboards and guitar. Thankfully, none of this music is besmirched by fromage. It all works, creating some sort of time capsule from 1992. Here and there I hear the mark that Peter Wichers has stamped on melodic death metal guitar. The melodies are all aces. And fuck, the solos are just killer. Beautiful stuff.

Somewhere around "Apparition," that magical metal moment occurs for me. Without realizing it, mind and body converge, and I start banging my head involuntarily. The song kicks a bucket-load of ass. We get vocals again with "Exhumed," but the singing isn't quite as strong as it was earlier.

"The Unlearning Dissent" is more of the lightweight, Marty Friedman musing. The lead sometimes brings "Fear of the Dark" to mind. The title track, "Monolith," starts to settle down into the stylistic realm of Symphony X. I think this is where From Exile are most comfortable. "In The Faded Silence" brings to mind Six Degrees of Inner Turbulence era Dream Theater.

This is reassuring, empowering, raise your fist to the sky and bang your head kind of stuff. If I heard this back in the day I would have played it until the cassette wore out. The question here is whether the different styles brought to the table make for a well balanced metal meal. I think Monolith comes pretty close. It's not surprising to see a band with so much technical prowess go unsigned in this day and age. What is surprising is the caliber of songwriting skill From Exile have to go along with the chops. I highly recommend checking this out. With maybe just a bit of refinement in the vocal department, From Exile could be a (metal) household name.

The album is co-produced with Dååth's Eyal Levi, who also contributes a guest solo on the last track. Emil Werstler performs a guest solo on "Apparition." The production is pretty good, considering there's so much going on here. Either way, it sounds excellent for a self released album. But you don't have to take my word for it - you can stream (and buy) the whole thing below. I picked up the album in FLAC. Awesome.