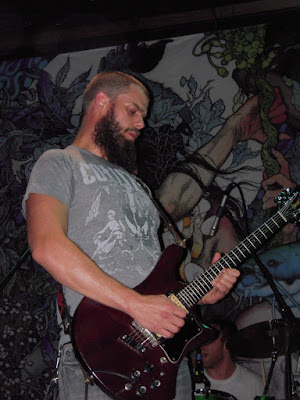 Blue Record digs deep into the elemental rock and roll that underpins existence. Such an epic album begs to be played live. Anyone who's ever seen Baroness knows they are a sight to behold on stage, so my expectations for this show were sky high.

The version of Blue Record I bought came with a bonus album - Live at Roadburn Festival 2009. The live album is a testament to the amazing chemistry that Pete Adams has brought to the band. I actually prefer these live versions of Red Album tracks to the originals. At the same time, the Roadburn performance shows us a band who like to bring massive spaced out jams and extensive intra-song noodling to their set. Some of the Red Album songs are stretched to absurd lengths. It's no wonder the performance on Friday night was characterized by these same qualities.

Jeanne Fury and I showed up at the Bowery in time for U.S. Christmas, who put on an often bizarre but entertaining show. At one point there were 8 people onstage, including 2 drummers, 3 guitar players, a violinist and the infamous crouching dude holding 2 tiny bells. Having never heard a note of their music before, I was actually impressed.

The Bowery Ballroom, like The Blender Theater, is not kind to openers. Both venues sport extensive downstairs bars that afford the crowd a chance to indulge their disinterest in unfamiliar acts. I completely missed Earthless' set, as I was swallowed by beer and conversation downstairs. The show started quite late, and as Baroness came out, the clock was already heading for midnight. 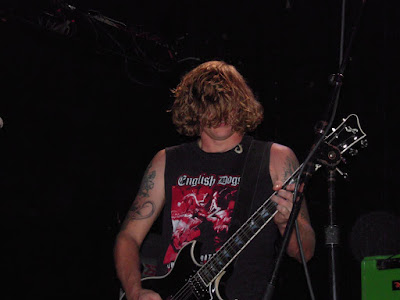 “Bullhead's Psalm” started things off on the appropriately esoteric foot, and “The Sweetest Curse” was incredible. Pete Adams thrashed as if gripped by a grand mal seizure. John Baizley screamed into the microphone with his mouth open absurdly wide, as if he could swallow it and the entire audience. The gorgeous, filthy, fuzzed out guitar tones of Blue Record were reproduced precisely here. I almost exploded when the first solo on “The Sweetest Curse” kicked in. I added my own air guitar stylings to the dueling lead. The sound was excellent, as it always is at Bowery. The vocals sounded fantastic. John and Pete showed off the same beautiful, ragged harmonization that they display in the Blue Record recording. 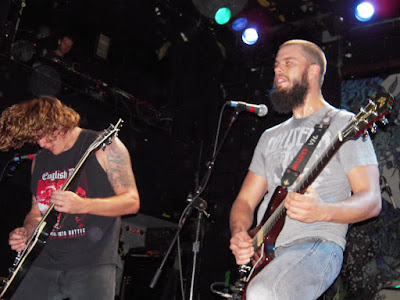 When “Jake Leg” kicked in, it really became evident how much these new songs rule in a live setting. The crowd, while quite energetic, seemed almost in shock at this point. It was about this time that I started dreaming the impossible dream – would Baroness play Blue Record in its entirety? Is that just a concert cliché these days? But it was not to be. After an elongated, Hendrix hallucination of an intro, “Isak” intervened. This seemed to wake the crowd out of their awed state. A modest pit broke out and remained in motion for the rest of the show. People were singing along with the guitar harmony in "Isak" as if it were “Fear of the Dark.” Unbelievably awesome. 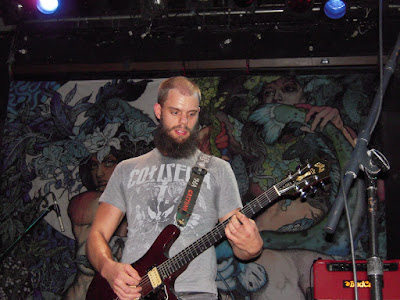 The audience was pretty diverse. The composition tilted towards normal looking folks, which is fine with me. I don't care if a venue is filled with regulation metalheads or tragic hipsters; as long as they move and have respect for their fellow concert-goers, I'm happy. Unfortunately, a lot of folks seemed to be of the stiff variety – they didn't budge an inch or bat an eyebrow through the whole set. I can't stand that. I like to flail, thrash and bang my head while trying out any number of absurd dance moves. Can't you feel this shit in your soul? 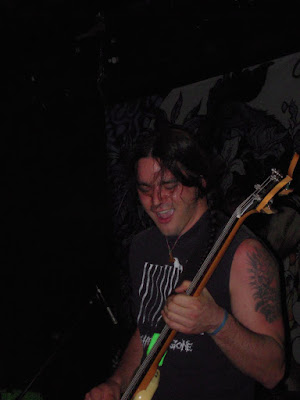 To be honest, some of the noodling that occurred between songs caused my interest to wane. That also could have just been the alcohol. At other points, I was filled with rapturous metal fury. The long set was a true rock and roll journey, with highs and lows. Tracks from the First and Second EPs sounded out of place to me. Although they added an extra helping of heaviness, they didn't seem to fit the spirit of Blue Record.

I was especially psyched to hear “Steel That Sleeps The Eye,” with its clean guitars and harmonized vocals. “Swollen and Halo” destroyed, and “A Horse Called Golgotha” got a wild response from the audience. Allen Blickle and Summer Welch brought the galloping thunder of the song to vivid life. Damn, I love Blue Record. Red Album was further represented by “Wanderlust” and “The Birthing.” “The Gnashing,” one of my favorite songs on the new album came towards the end, and “Grad” closed out the amazing set.

Calling it “the first song Baroness ever wrote,” “Towers Fall” from the First EP was the encore. Decent song, but again, not up to the level of their last two albums in my book. All told, it was an excellent night. A good chunk of Blue Record was represented, and that did the job for me. If this album moves you like it moves me, you've got to get out and see Baroness on this tour. 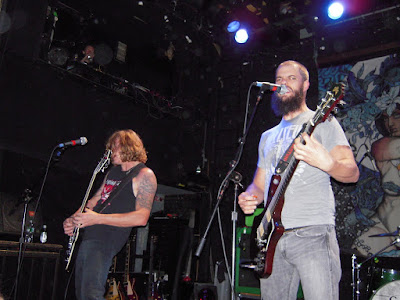