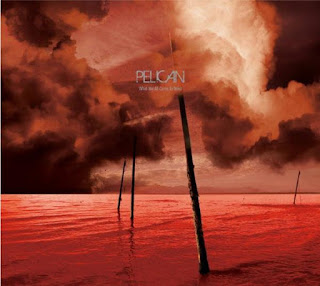 I have to admit that my first reaction to What We All Come To Need was a disappointment. I've been listening to Pelican's instrumental insanity a lot over the last few years and have become particularly attached to City Of Echoes. It took me a while before I could step back and give Pelican's Southern Lord debut some space. It was worth the effort.

The first thing you'll notice about this album is a change in the rhythm section. Larry and Bryan Herweg have been oft criticized by Pelican detractors. They've certainly stepped up their game on WWACTN. They sound positively vicious. At the same time, they're much further forward in the mix – almost to the point of washing out the guitars at times. At the very least, the drums and bass are turned up to 11 here. The overall effect is a less passive sounding album. WWACTN demands your attention.

Trevor de Brauw and Laurent Schroeder-Lebec are masters at marrying sludge metal riffery with clean post-rock guitar melodies. Trudging, downtuned riffs drive each song, while distinct melodic movements develop on top. This pattern still works to fantastic effect on WWACTN. Unfortunately, I think it starts to get a bit formulaic here at times. There are still tons of incredibly inspiring moments on this album. There are also plenty of riffs that will make your head bang uncontrollably. I guess my main issue is that there doesn't seem to be much sense of adventure on WWACTN. I realize that this is a cognitive, not aesthetic issue. With each subsequent listen, though, this thing wins me over a little bit more.

“Glimmer” opens up the album with a guitar riff that evokes Gustavo Santaolalla's dusty Latin vision. The rhythm section thunders in, and you've got your first indication that things have changed. Following their well-worn formula, the leads interweave with the sludge in a pleasing manner. Four and a half minutes into “Glimmer,” we get the first melodic break. Clean arpeggiations follow a nice bass line in a staccato dance. Gorgeous stuff.

“The Creeper” starts with an almost bluesy riff that makes me think of driving across vast American landscapes. From there, it breaks into a prototypical Pelican stomp. This song moves, and you can't help coming along for the ride. Generally less complex than the average Pelican ditty, there's something irresistible about “The Creeper.” “Ephemeral” follows, taken from the EP of the same name. It's a fantastic song that definitely sounds great live. It also contains the thrashiest riff on the album. It demands noddin' of the noggin.

“Specks of Light” is driven hard at first by a feral bass line. In short order it gets a helping of memorable melodic sauce. Close to the three minute mark, we get a ringing mellisonant moment that really grabs you. There's definitely some of the spacey The Fire In Our Throats Will Beckon The Thaw feel here.

The remainder of the album is mostly engaging, and when whenever it lulls, a heavy riff draws you back in. The razor sharp drum and bass production also serves to focus your attention more acutely on the music. WWACTN is an album that thirsts for the open road. Great driving music. The most joyous song ends up being the title track, towards the end of the album. It ends with an effect-laden melody that devolves into thin air.

The guest appearances from Aaron Turner and Greg Anderson go mostly unnoticed in the instrumental din. The most notable outside contribution to the album is Allen Epley's vocal performance on “Last Breath.” To be honest, I think the singing diminishes the song. Epley's voice makes me think of Jerry Cantrell. Although it works well, I don't think it's necessary or innovative.

WWACTN is a worthy addition to the Pelican catalog. It took a while to grow on me, but that's OK. If I were a newcomer to the band's music, I'd certainly start elsewhere. I think in the end, what we all come to need is just more Pelican. I'm psyched to hear some of the new tracks live. I'm planning to check them out in December at The Highline Ballroom in NYC.