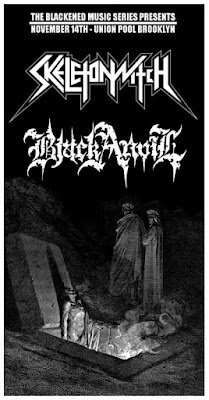 As I walked into to the music venue at Union Pool for the first time, I was immediately struck by the smell. I was flooded with ancient memories of raging subterranean metal shows; it smelled like Coney Island High. Whiffs of prehistoric cigarettes, sweat of cro-magnon male and the distinctive odor of Pantene conditioner borne upon the wind by banging heads - that's the smell of metal.

The venue at Union Pool is a free-standing room, separate from the bar. In the outdoor garden that separates the two, members of both bands hung out with congregations of fans. It was a very casual scene. “El Diablo Tacos” provided a hilarious backdrop and excellent food. With “air conditioning provided by Satan,” the taco cart was clearly ready for the metal. The scene has changed drastically since I lived in Brooklyn. Not too long ago, your only Brooklyn venue for metal was L'amour, which was little more than a historically significant hellhole. Union Pool is serviceable and homey. I dig it.

The modestly small room started to fill up before Black Anvil's set, and it became obvious that all the folks outside weren't going to fit in the venue. As I perused the merch table one last time, the girl selling tickets had to start turning people away. 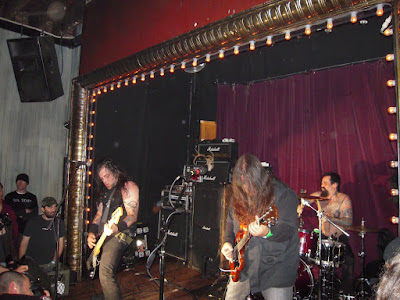 I picked a strategic spot in front of the bar as Black Anvil stepped on stage. They completely fucking raged. The sound was pretty decent, and the home crowd was enthusiastically feeling the blackened thrash. Paul Delaney hammered his bass with absurd fury and showered the crowd with his satisfyingly evil screams. Gary Bennett assumed his head-down-shred pose and only punctuated that with an occasional brutal howl into the microphone. Raeph Glicken, the tattooed wonder, beat the hell out of his kit and looked like he thoroughly enjoyed the workout.

Heads banged quite a bit to the well worn tracks off Time Insults The Mind, but it was the new tracks that really impressed. I would say a certain sense of refinement and complexity could be found in the enjoyable new songs. I'm certainly psyched to hear their upcoming album. At the very least, Black Anvil were the perfect complement to Skeletonwitch. When they finished, I met up with Jeanne Fury and we returned to the sheltered corner in front of the bar. 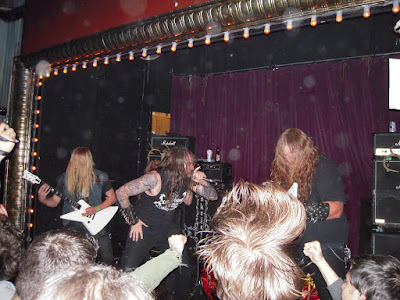 Skeletonwitch set up with a quickness. The venue was bursting at the seams, and it seemed that quite a few more people had mysteriously been let in. When the band hammered out the first shattering notes, the crowd started convulsing in all directions, with hair and fists flying. My neck was already sore, but extra beer gave me the endurance for a headbanging marathon.

These dudes completely destroyed. Skeletonwitch songs are built for the live experience - short, sweet and filled with glorious thashing riffage. New tracks off Breathing the Fire fucking crushed beyond dust. The sound was surprisingly excellent in the small space. Guitars were distinct and sharp. Chance Garnett was absolutely intense. The man drank enough PBR during the set to fell an ox. We were showered in beer multiple times. I liked the mix – Chance's vocals were audible, and everyone was screaming along. The crowd was fantastic – headbanging and pushing and shoving but perfectly civil. This is the way I love a metal crowd – very physical but devoid of violence. There was a smile on everyone's face and almost every last person was shredding the air guitar. Metal ecstasy. 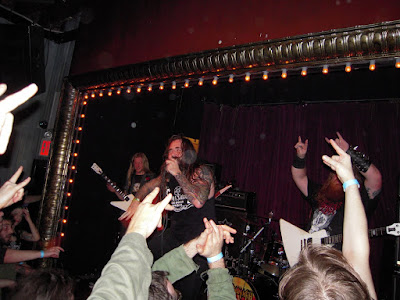 The band had a tired, battle-worn look, having spent an eternity on the road. They also had the well-honed metal edge of infinite practice. Nate Garnette and Scott Hedric looked like their barely visible fingers could thrash out these riffs in their sleep. From my vantage point, Nate and Evan couldn't hide the smiles on their faces. The crowd was absurd. How a circle pit formed in those confines was an affront to physics. But it happened. Crowd surfers threatened to fly over the bar and completely annihilate it. The look on the bartender's face was priceless.

The setlist balanced equal parts fire and frost, showcasing every kind of shreddery. Seriously, this was the most fun I've had at a show in quite a while. If you haven't seen Skeletonwitch live yet, do it before you die. Deafening screaming from the crowd brought a two-song encore that ripped us limb from limb. Did I mention this was a blast? As we filed out of the venue, completely spent and dripping in sweat, Jeanne Fury pointed out the fire warden's sign: “Maximum occupancy not to exceed 74 persons.” Are you fucking kidding me? Clearly there were more than 74 people jammed in there. Either way, there are a hell of a lot more than 74 Skeletonwitch fans in New York. Headlining U.S. tour please?

You can check out the rest of the photos here: