2009 was the year I accepted grindcore into my heart. I've always been a fan of Napalm Death and Nasum, but I never became a true believer of the genre. Thanks to the word of some righteous preachers and a wafer of Wormrot, I'm born again. Rest assured I'll be focusing my musical obsessions on grindcore this year with a religious fervor.

One of my first points of reference in exploring grind was Andrew Childers' Dirty (Baker's) Dozen. Assück stood out of this exegesis of grind canon for several reasons. First, the band's name is more than a little striking. Second, I've been seeing people at shows in Assück T-shirts for 15 years and never heard a minute of their music. I decided to rectify that situation.

Thanks to the wonders of Amazon wishlists, I was able to acquire ABS+3 as a holiday gift this year (along with Misery Index). The album is out of print, and that's just not cool. The songs on this compilation were recorded between 1990 and 1992. The album is comprised of the Anticapital LP (1992), the Blindspot EP (1992) and a trio of songs from a split and compilation (circa 1990).

ABS+3 was an immediate and immense revelation to me. The music bears obvious resemblance to Napalm Death of the same era. The 17 tracks representing the Anticapital LP alone are worth the price of admission. Anticapital derives grind doctrine from Mentally Murdered era Napalm Death, but lacks the spastic chaos that Bill Steer spewed on his last Napalm recordings. In many ways, Anticapital also distills the austerity that we get from Napalm's next generation on Harmony Corruption. The songs are imbued with the crushing guitar sound of “If Truth Be Known,” but also display some of the massive groove Bill Steer bestowed upon “The Missing Link.” 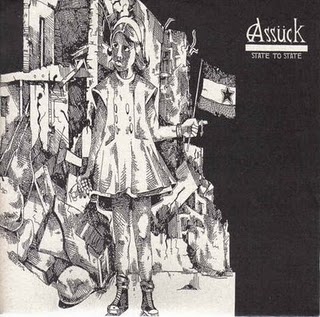 But enough about Napalm Death; Assück dance to the beat of a different drummer. Rob Proctor's performance on this album is nothing short of legendary. By eschewing Mick Harris' hectic obsession with speed, Mr. Proctor displays a patience and precision that casts this grind in a different light. There are, of course, blastbeats and speed a-plenty. It's just a different kind of speed. I'm no expert on drumming, but there's something organic, flowing and fierce here that you can't find anywhere else. Mr. Proctor's skills often makes me think of Keith Moon; I love the idea that you can suddenly be completely surprised by the drumming in the middle of a song. You have to stop for a moment and think, “Did he really just do that?”

The incredible drum sound is part and parcel with the production. Whereas Napalm Death recordings of this era feel compressed into a tiny and explosive sonic spectrum, Anticapital sounds wide open and free. There's a nice stereo separation to the instruments that gives the thing an intimate feel. I feel like I'm sitting in a room with these guys.

Steve Heritage is a grind riff machine. He squeezes an amazing diversity of ideas from the traditional grindcore palette. The guitar sound here is perfection – this is the bottomless and razor sharp tone I crave. There's an incredible synergy between the crushing guitar sound, atonal chordage and never ending plethora of rhythms. I don't think Assück deign to use the same riff pattern twice on the album.

Paul Pavlovich barks out these lyrics like a highly articulate canine. His perfect diction ensures that the righteous poetics get their due. Anticapital is the real deal, one of those rare metal albums you can sit and listen to while following along with the lyrics and not be embarrassed for humanity. I'm a lyrics guy; it's part of my schtick. I like to know what the music is about (see blog sub-title). It gets me in trouble sometimes. That said, Assück deliver an engaging treatise on the flaws of society, religion, government and politics. They hit up all the important talking points. “Along with the art of conquest and domination, we have developed the absolute science of ignorance and bound it in text for generations of the unthinking.” Right on. 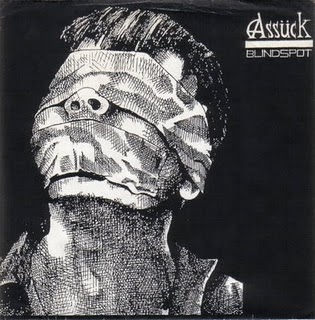 The +3 songs come in the middle of the album, out of chronological order. These tracks are a bit more raw, but also have more stylistic range. “Suffering Quota” features an amazing descending riff that spins down a detuned toilet; it's a match for any demented Carcass riff. “Parade of the Lifeless” features some of the more amazing drumming to be found on the compilation.

The Blindspot EP rounds out the album with material that's just as strong as Anticapital, but it suffers from less articulate production. It's unclear, based on the liner notes, which parts of the compilation were recorded at Morrisound studios and engineered by Scott Burns. Based on the reduced sonic spectrum of Blindspot, I'm most inclined to suppose it got the Morrisound treatment. Nevertheless, tracks like “Blindspot” are still incredibly edible bits of grind.

It's always a good day when I can add a classic album to my music collection, and ABS+3 is every bit a classic. And it doesn't suck one bit of ass.