Posted by atanamar March 03, 2010
After being blown away by their debut album, I decided to get a taste of the Flaming Tusk live experience. I needed to know whether or not these guys are the real deal; many good bands I've discovered recently don't achieve much in the way of live performance.

My brother Frank and I rolled into Brooklyn on Sunday night to catch Flaming Tusk at Legion in Williamsburg. Legion is a fairly nice bar with a good selection of beers. The back room is evidently a great space for music if you dig a cozy vibe. Before Flaming Tusk went on, we got a chance to meet some of the band members, and they are extremely nice guys. That's a good start.

Following a brief intro, the band launched straight into “Ichor,” and promptly began to decimate the modest crowd. My burning question was answered immediately; Flaming Tusk are the real deal. The sound in the room was surprisingly true and balanced. My brother, the audio engineer, gave his seal of approval to the mix. 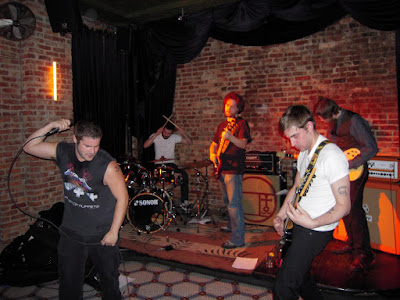 The first thing that struck me about the performance was the vocals. Stolas Trephinator can reproduce his croaking screams and gurgling grunts perfectly live. It's kind of shocking. The guy is charismatic, confident and downright terrifying – everything you want in a metal front-man. The rapid-fire monologue in “No Smiles” was particularly impressive.

Lead guitarist Don Blood and his compatriot Zosimus sounded tremendous. The interplay of their disparate yet harmonious riffage was a sight to behold. I didn't use the adjective “sludge” in my review of Old, Blackened Century, but the word came to mind as I watched the performance. Flaming Tusk is, after all, the absurdist daydream where Enslaved makes Mastodonic love to Baroness in a post-rock moonscape while Abbath stands by and cackles. 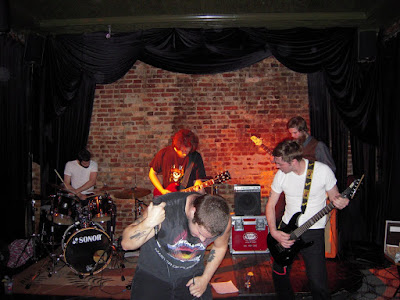 Every song flew by and induced copious headbanging. The excellent songwriting and composition on the album manifested in what I like to call the “metal suspension of disbelief.” It's the state where I become totally immersed in a live metal performance, forget that I'm in a room full of people, and completely lose my shit. It's what I live for. 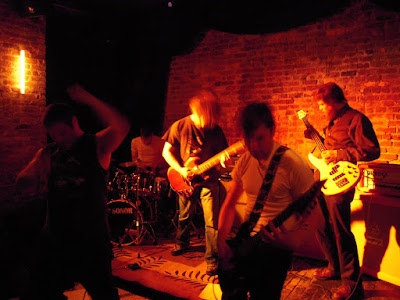 In a small room with no PA (except for vocals), the drumming was more prominent than on the album. Dumnorix Xristophage fucking raged behind the kit, and the songs sounded just a smidge more lively than on tape. I feel like the rhythmic peculiarities of the songs were magnified in a pleasing way. With the help of bassist Schneidaar, the rhythm section made the tunes seem preposterously heavy. Album opener “Anathema” was a musical stampede. “Tell your God I approach,” indeed.

“My Red Sun” and “I Nap In Blood” rounded out the run of righteous tracks from Old, Blackened Century. The lone cover song was “Ground Hog” by Spirit. This went completely over my head, but thankfully my encyclopedic brother was there to inform me that Spirit was a psychedelic rock band from the late 60s and 70s. The song sounded good to my ears, and if nothing else, it showed that Stolas Trephinator can belt out clean vocals as well as he can gargle marbles. I suppose it also gives us a glimpse into the eclectic influences at work. 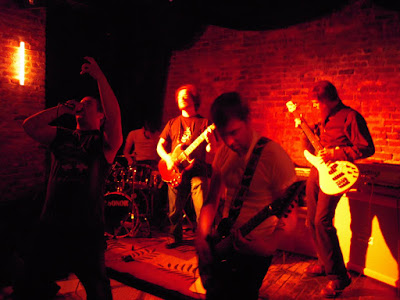 “Abigail (Guts Down The Drain)” and “26 Legions” closed out the excellent set. Although I think Flaming Tusk have increased in skill tremendously since the Abigail EP, these tracks of raging blackened sludge via memorable post-rock melodies are still infectious.

As you can probably tell, I think Flaming Tusk are a worthwhile and completely unique band. They have a ton of potential. The upward trajectory of their skills guarantee Flaming Tusk a big upside. The live show seals the deal. Expect big things from these guys.