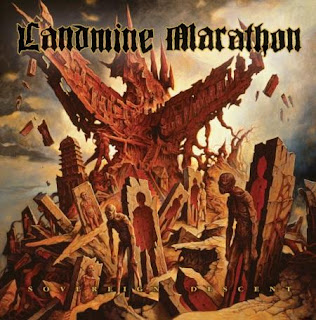 Sovereign Descent is fucking red-hot. As “Exist” fades in, you'll feel like you're standing in front of a blazing grill, attempting to pull a righteous cut of beef from the flames at the exact moment it goes from raw to rare. On Rusted Eyes Awake, the meat was in the hooks; the oft mentioned “Earache” flavors were obvious but not overpowering. On Sovereign Descent, the meat is perfectly cooked, and the juices are still running red. This is a cohesive and raging album that stands on its own merits.

At its heart, Sovereign Descent is a slab of outstanding, mid-paced death metal with a soul of grind. The instrumentation isn't revolutionary, but the spirit that propels these songs is peerless. Dylan Thomas and Ryan Butler present a parade of withering riffs in a guitar tone that radiates heat like napalm. Matt Martinez' bass maintains a rolling boil throughout. The rhythms range from strolling doom to barreling blast beats, and through it all, Grace Perry belches fire.

“Exist” really is a fantastic album opener. It takes some time to process what you're hearing, but once it's warmed up, the song will destroy you. It elicits uncontrolled headbanging at 2:20, a circle pit at 2:30 and from there, I'm hooked. Lyrically, “Exist” is a love song in the same way Carcass' “No Love Lost” was a love song. 'Nuff said. The guitar sound is marvelous and gives fiery life to the grinding riffage. A glorious and complimentary solo drives the song to the edge of madness, and then a tremolo dive sends the track into blasting mayhem.

In terms of females plying death metal vocals, Sovereign Descent is the high water mark in my eyes. Without much in the way of processing or effects, Grace Perry conveys the monstrous essence of death metal. Some vocalists scream in this style simply because it's the convention. Grace Perry shreds her vocal chords to tell you something important. Like any great album, the lyrics are an integral part of the art. Everything here is thought provoking and goddamned poetic. My appreciation of Sovereign Descent was definitely enhanced by the words therein. “The direction is far from up; the corruption runs so deep; we are all left unheard screaming for peace.”

The production aims at conveying a burning ember vibe. Everything here is pushed perilously close to the limit. Strangely, Mike Pohlmeier's drums cross that line and are mixed in the red. From the very first track, you'll notice that the drums are mixed so aggressively as to have that distorted Death Magnetic sound. Some part of me wants to take issue with it, but as the album progresses, it becomes a part of the overdriven whole. Sovereign Descent merits this kind of production as much as Death Magnetic did not.

At times the riffage is simple but effective. “Justify the Suffering” evokes the martial drone of Bolt Thrower. “Foul Revolt” sports an addictive shifty riff. I get the distinct semi-melodic feel of a God Dethroned tune, but Grace Perry's unhinged vocals keep the song on the very fringes of sanity. “Rise With The Tide” fucking moves, and we are implored to “become an iconoclast, seize this virtue that is so faint.”

“Steadfast Hate” has slow doomy passages that would make me think of My Dying Bride if Grace Perry wasn't bellowing over it all. She sounds like the words are erupting through a tracheotomy on this track. That slow riff shifts into a higher gear, and the vocals become positively demonic. As with many tracks on the album, I get the feeling this song would elicit an epic pit.

If you've got a taste for incendiary grinding death, I highly recommend picking up this album, if only with asbestos gloves. I'm certainly looking forward to witnessing the scene these tracks will create in a live setting in the not too distant future.

P.S. Doesn't the album art rule?
P.P.S. You can stream the entire album here (for a limited time, I'm assuming).