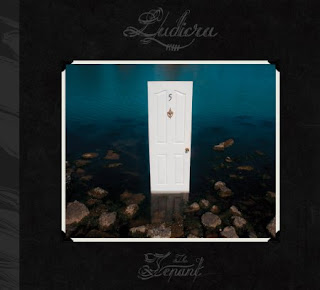 Amidst the gorgeous album art and liner notes for The Tenant, there are pictures of each band member in the confines of an apartment, peering at us through a window. For me, The Tenant is all about confinement (lyrically), and the escape from its grasp (musically).

Ludicra easily harness the powers of atmospheric black metal to express melancholy and disgust. Laurie Sue Shanaman's screaming voice is the ideal vessel for utter anguish. The Tenant builds upon that black metal bedrock to build a complex and beautiful edifice. The guitars progress from that subterranean aesthetic into realms of major chord contentment, triumphant crescendo and thrashing release. Laurie Sue Shanaman's screech slides into semi-chanted, melodic singing. Her Nico-like croon takes us far afield from the expected. At times, Christy Cather offers her own tortured vocals to the mix, often on top of the clean singing.

In “A Larger Silence,” bouncing acoustic passages flow into victorious guitar solos. The song ponders the act of suicide, presumably by jumping off a bridge, and asks “Does it feel effortless? Does it feel free? Is it as easy as they say?” “In Stable” thrashes like “Devil's Island” while Laurie Sue Shanaman laments being “Suffocated (in bags) of compulsion.” An enthralling NWOBHM riff intervenes to recall the best moments of Cobbett-era Slough Feg, tinged with strands of The Fucking Champs.

Aesop Dekker ably helms the ship through all manner of rhythmic seas. His drumming rises above the din at times and we get a glimpse of the absurd talent at work. Ross Sewage can be heard throughout the album, pulling us through the depths with a bass sound that is perfectly mixed while maintaining an acquatic rumble. John Cobbett and Christy Cather deliver an endless array of riffage that is ultimately progressive in its scope.

“The Undercaste” starts with an intro that wouldn't be out of place on Powerslave, then quickly shifts into a shuffle built on a memorable guitar melody. The song explores the meaning of hardship and hunger as well as the plight of the weak and worn. “There's never enough (of anything) to go around.” Clean guitars mix with harmonious leads and evoke visions of doom. The song descends into melancholy and the clean depths of layered voices. Despite lasting 10 minutes, “The Undercaste” never tests my patience.

“Truth Won't Set You Free” starts again from a point of hopelessness, but moves into vast and shifting melodies that certainly touch upon the might of Weakling. The tone shifts perceptibly throughout the song, moving closer and closer to furious victory. At the six minute mark, the guitars launch into a glorious staccato thrash; it's certainly one of the best riffs on the album.

The title track finally sheds light on the curious album photos, exploring the meaning of confinement “Within your walls of want, The frame in which you haunt.” “The Tenant” is probably the most progressive track on the album, dealing out mid-paced, arpeggiated chords that shift from dark to light at 4/4 speed.

In the end, I'm enjoying The Tenant very much, and I think I will be for a long time. The album conveys a host of emotions via excellent songwriting, and never for a minute does it exude eau de fromage. Ludicra have a completely unique and recognizable sound; I imagine it takes an open mind of sorts to appreciate their vision.

Ludicra will be touring the U.S.A. in April. I've got a ticket to see them in Brooklyn with Krallice, Castevet and Attake.