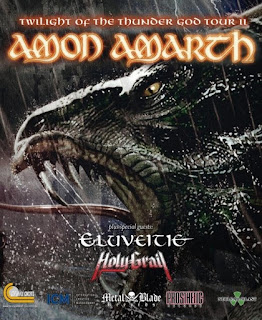 Jeanne Fury and I strapped on our beer horns this past Sunday for an evening of pillage. Amon Amarth consistently put on one of the best live shows you'll find in metal, and this night was no exception.

After arriving at Irving Plaza, we retired to the trusty upstairs bar for a bird's eye view of the openers. First up was Holy Grail from California. I'd checked out a couple of their tunes beforehand, but I wasn't completely knocked out by their traditional heavy metal delivery. Despite that, I could tell they'd at least be entertaining in person.

Holy Grail were in fact quite exciting to watch. Their sound, stage presence, moves and banter placed them firmly in the lineage of Judas Priest. The tunes ranged from mid-paced chuggers to all out thrash, but the guitar sound was unfortunately muddy. Singer James Paul Luna pulled out all the stops and wailed with abandon. The packed crowd reacted quite a bit to the performance. I couldn't hone in on any discernible hooks to grab my attention, but that might have just been a result of the mix. 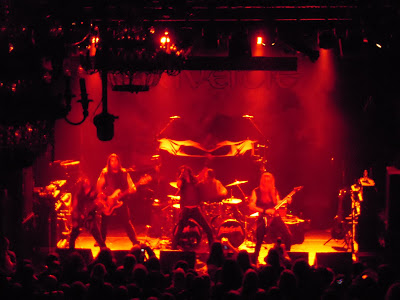 Next up was the folk metal horde known as Eluveitie. Honestly, I can't begin to fathom the allure of this music. The renaissance fair vibe and plethora of folk instruments(hurdy gurdy, fiddle, mandolin, whistles, etc.) hitched to a melodic death metal wagon just does not appeal to me. But I was in the clear minority on that subject; the crowd was absolutely insane for Eluveitie. 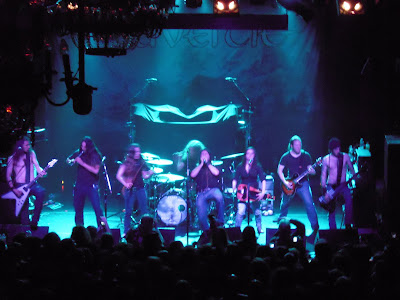 Despite having eight band members on stage, the sound was absurdly clear. The band must employ a sound-person of extreme skill to mix all the instruments that get dragged out. There's no denying that Eluveitie are an incredible live act. The band managed to whip the adoring crowd into the biggest circle pit I've ever witnessed at Irving Plaza. I was completely stupefied. 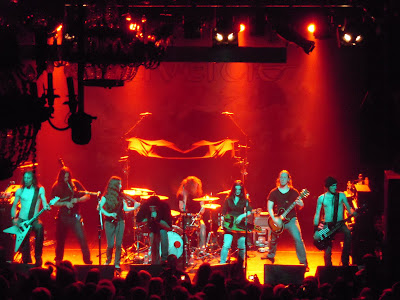 We met up with Justina Villanueva and Lev Weinstein of Krallice after Eluveitie finished their set. As Amon Amarth unfurled their massively impressive backdrop, Lev and I waded into the crowd to soak up some of the energy. This would be the fourth time I'd seen Amon Amarth and the third time at Irving Plaza.

As Amon Amarth launched into “Twilight of the Thunder God,” the crowd erupted accommodatingly. I noticed for the first time in all my years of concert-going that the band was sending the output of a smoke machine through the venue's ventilation system. With “Free Will Sacrifice,” the temperature rose precipitously and the mass of seething bodies became sopping wet in a misty field of battle. 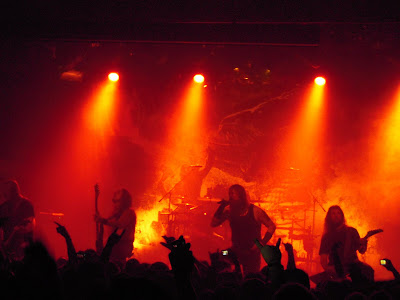 Amon Amarth always seem to coax the best out of Irving Plaza's sound system. The B-tuned guitars were crystal clear, and at many points the crowd could be heard singing along with the guitar melodies. As usual, the folks around us were screaming and singing along with Johan Hegg's vocals, at times drowning him out. It's easy to get caught up in the enthusiasm and hard not to bang your head constantly. During “Runes To My Memory,” a couple of fine drunken fellows in front of us dramatically acted out the lyrics to the song. 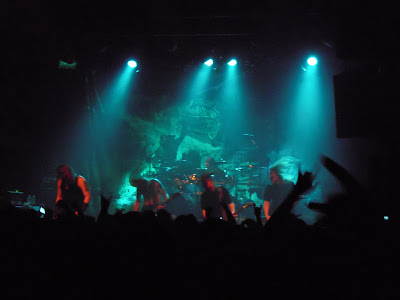 Each time I see them, Amon Amarth manage to vary their setlist greatly. On this night they pulled out “The Dragons' Flight Across the Waves,” “Valkyries Ride,” and “...and Soon the World Will Cease to Be.” Many great songs from the last two albums were featured. “Tattered Banners and Bloody Flags” and “Varyags of Miklagaard” were particularly awesome. The Crusher and The Avenger were skipped over completely, but it was nice to hear some of the deeper cuts off Twilight of the Thunder God. I don't think anyone was upset. 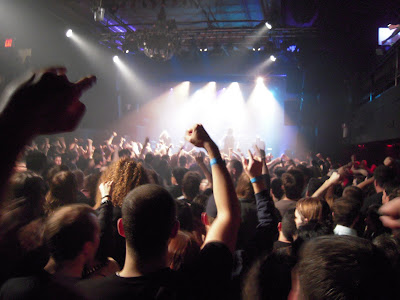 “Cry of the Black Birds” and “The Pursuit of Vikings” closed out the set, complete with the requisite sing along chant. Johan Hegg implored the crowd to scream louder for Odin, even if we didn't know the words. The crowd reacted with rapturous roars of supplication. “Guide our ships,” indeed. Sunday was another great night of metal, and it was nice to share some battles and brotherhood with Lev, Justina, Jeanne and a few hundred other sweaty folks.
Amon Amarth Eluveitie Holy Grail Irving Plaza