Posted by atanamar May 28, 2010
The temperature reached 94 degrees on this balmy evening, but even the thought of being boiled alive in the Knitting Factory couldn't detract from my excitement for this show. Jeanne Fury and I rocked some serious Taco Chulo beforehand and rolled into the venue fat and happy. We saw Justina Villanueva outside, who has been out on the road documenting this tour on film. One bit of insider information she passed along was that "Blacky" Thériault of Voivod was running the soundboard. It was a good omen. 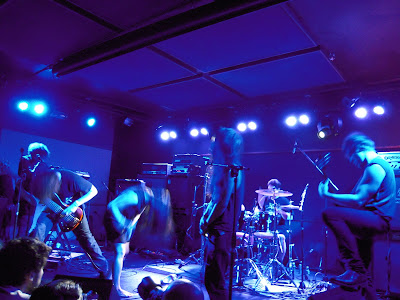 Bloody Panda started off the show on time, which made me quite happy. Their brand of avante garde doom certainly isn't my cup of tea, but they put on a bizarre if not entertaining show. Yoshiko Ohara howled, chanted and screamed (the blood curdling variety) along with a crushing dirge of doom. Her counterpart, Gerry Mak, accompanied her in a dry throated rasp. Guitar player Josh Rothenberger smashed slow motion chords that evoked a harrowing atmosphere. Of most interest to me is the fact that Bloody Panda share a rhythm section with Krallice. It was fun to see Nick McMaster and Lev Weinstein plying something a little bit different from the high speed sauce they spew in Krallice. I spoke to Lev later on and asked him how he had the patience to play tunes so much slower than his usual fare. He said it was actually quite fun, if not cathartic, to do the doom thing; the crawling rhythms give him the opportunity to pound the living hell out of his drums on each beat. 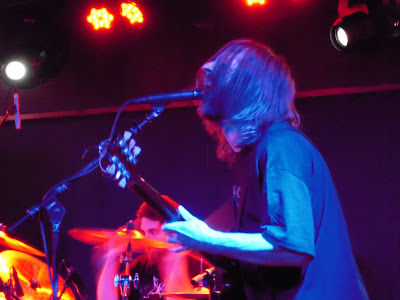 Krallice set up quickly, since half their gear was already on stage. They kicked off their set well ahead of schedule. There's not much I can say about these guys that I haven't already said. Krallice are simply badass on stage. The sound was much better than their last outing at the Knitting Factory. The set consisted almost entirely of new songs. The musical minds in this band move faster than the gears of the music industry – they already have a new album in the can and are constantly looking to the future. Each of the new songs has a distinct personality and recognizable melodic movements. I can only imagine the next Krallice album will be another step on the steep slope of their upward trajectory. 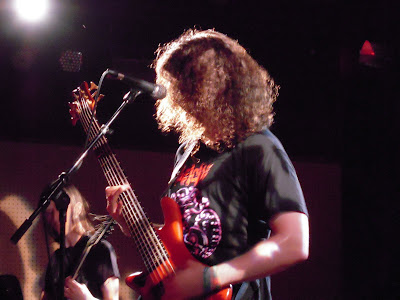 Having said that, I'm starting to notice a certain tension in the crowds at their shows. Krallice are quickly gathering new fans who worship their recorded material in a way that only music fanatics can. When the band come out and play a set of new material, it can be disappointing to some of these folks who only want to hear their favorite songs. You know them; the guys who scream out song titles at the band throughout the set? The excellent “Time Husk” would have to satisfy them on this night.

The changeover for Portal took quite a while, and during that time Jeanne and I were introduced to Seth of Baroque, Bleak, Brutal (and the band Gods of Fire) as well as Elise of Reign in Blonde. Very cool folks. It was great to meet more genial members of the metal blogger community. It was also interesting to get a completely different perspective on the bands playing this evening. 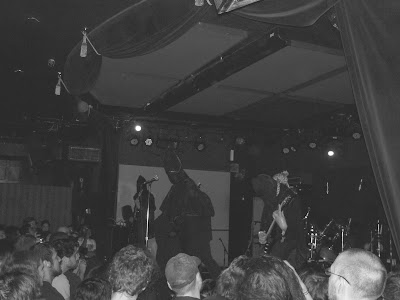 Portal's music has grown on me tremendously. My initial reaction upon hearing Swarth was probably par for the course; the album was outlandish, strange and off-putting. But in the end it won me over. The members of Portal came out on stage, as is their custom, in hoods and costumes that fully obscure their identities. I honestly don't care for the theatrics, but I can appreciate the value of a good stage show. The temperature in the Knitting Factory had risen incredibly over the course of the evening, to the point of distraction. Throughout Portal's set I kept wondering if these guys were going to pass out on stage from dehydration. The vocalist, The Curator, was draped in the most extensive set of robes, and he limited his movements to dramatic gesticulations. He drank water from a water bottle THROUGH his hood, which seemed impractical at best. 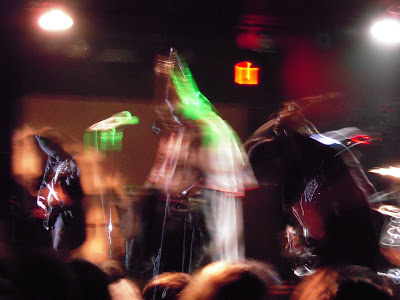 I'd formed a hypothesis that, in a live setting, the drumming would take a more commanding role in Portal's music. I was completely wrong, and therein lies one of Portal's greatest peculiarities. The band have no conventional sense of rhythm. The drums follow the guitars in their abstract, swarming dance and hide deep in the mix. For the most part, the guitars were well mixed and very audible. The ebb and flow of the wave-like melodies and unmelodies became semi-hypnotic. Ultimately, though, the performance wasn't as immersive and enthralling as I'd hoped, mostly due the uncomfortably hot conditions. Many people describe a Portal performance as scary or somehow disquieting. I didn't get that sense at all; we are, after all, fans of death metal. The atmosphere Portal create is interesting and impressive, but in no way actually frightening. In the end, it was an entertaining set, but I'd love to see Portal again on a cooler day.

As I found out on Friday night, Luc Lemay is a jolly and downright friendly guy. He recognized me at the merch table when I went to buy a t-shirt, and he shook my hand mightily. When Gorguts stepped on stage, you could tell the man was sincerely happy to be there. The band opened up with an instrumental number that I believe was new. This was followed by the self-titled track off From Wisdom To Hate. The band sound fantastic and have a great chemistry. Kevin Hufnagel complements Luc Lemay's obtuse guitar playing perfectly, and Colin Marston brings ridiculous skill and energy to the complex bass-lines of a Gorguts track. This incarnation of the band just exudes energy and the joy of shredding. Clearly, Luc Lemay loves the band of young go-getters he's shacked up with.

The crowd was ecstatic and burst into a pit several times. The setlist covered all four Gorguts studio albums. “Obscura” was mind blowing, and the perfect sound helped immensely. I think that two other new songs were played, and each had the distinct flavor of latter era Gorguts. If I'm not mistaken, the excellent track “Nostalgia” off Obscura also made an appearance. “Orphans of Sickness” brought the satisfying technical edge that originally got me into Gorguts. This was simply an amazing performance. Gorguts are going to annihilate the Maryland Death Fest this weekend. 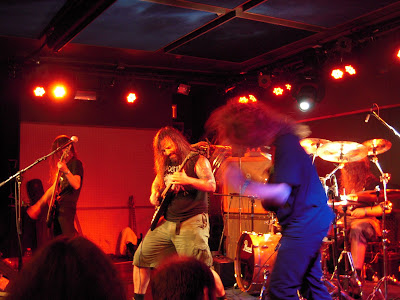 Luc Lemay announced during the show that Gorguts would be recording a new album at the end of this year, to hopefully come out in 2011. The set closed out with “The Erosion of Sanity” and raucous cheering from the crowd. It was an immensely rewarding show that I'll remember for a long time. The band came out for one encore and played “With Their Flesh, He'll Create.” Exactly. 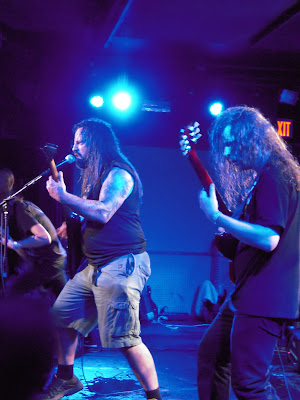