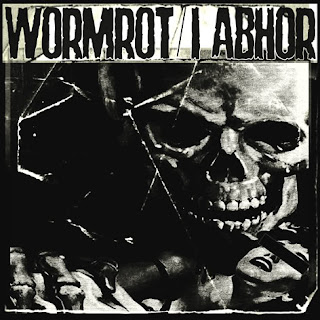 This split serves up a gourmet grind meal. I Abhor plate a curiously delicious appetizer to whet your appetite. Then Wormrot deliver the main course, a transcendent dish served on perfect porcelain and devoured in four bites. Of course, this breed of fine dining does nothing to fulfill your appetite, and you sure as hell don't belong in this establishment. Hit repeat, toss the tables, thrash the clientele and get the circle pit going.

I Abhor start you off with “Downfall”, where semi-clean, fat guitar joins a cymbal ride to create an austere, Assückian atmosphere. The first few seconds of this song make you wonder whether or not you're going to get some “Corporal Jigsore Quandary” action, but then I Abhor rev the engines and reveal their true nature. Dueling vocals battle over fantastic drumming while the guitars mostly slink and slither deep in the mix.

I Abhor change speeds frequently and do evoke an Assücking atonality in my infantile grind mind. Some guitar riffs border on experimental but at many points the mix obscures exactly what's going on. Blasts and grooves get equal space, and I really dig the snare-heavy drum action. The real charm here for me is the vocals. One guttural voice has swallowed the mic, while the other persona provides scathing vocalizations that remind me heavily of Daniel Jansson's work in Culted (purveyors of blackened doom). Everything here makes me want to hear more from I Abhor.

Then, well, Wormrot hand you your ass. If you are a fan of Abuse, this is mandatory ownage. These eight tracks reveal a band moving forward, gaining momentum, writing better songs and gunning for glory. Each tune has an individual personality, astounding hooks and complete memorability. “Twelve” gives us a Sesame Street sample out of left field and showers us with screams for 15 seconds. “Critical Human Stupidity” then dispenses a deft punk intro in 4/4 time that will throw you for a loop with its gleaming simplicity. A gurgle from Arif lets us know this motif won't last long. 35 seconds in we get a superlative riff that mutates through another groove and devolves into a barrage of blasts.

These tracks might display a greater rhythmic diversity to my ears than Abuse, and that's part of the magic. “Talkshit Holocaust” and “Terminal Turbulence” lay down distinctive riffs over an array of beats that you won't forget. “Retarded Collisions” has one of the most preposterously glorious grind riffs I've ever heard. No shitting; your motor neurons will be starting their own pit before you know what's going on.

I heard most of these songs for the first time when I saw Wormrot live a few weeks ago. It's a sure sign of their quality that each track was observably distinct and memorable. It was fascinating to witness Arif spew each of the numerous vocal styles displayed in these tunes. Rasyid may effortlessly rip off perfect riffs and Fitri might lay down many a precise blast, but Arif's dementedly dissociative vocals are the element that push Wormrot into madness.