I'm working on a theory that local grindcore shows are always fun, whether or not you're familiar with the bands and their music at all. My initial motivation to come out on this night was to see Flourishing, whose A Momentary Sense of the Immediate World EP is still one of my favorite albums of the year. A brief survey of the other bands on Myspace revealed an array of thrashing grind goodness. I was sold. In terms of promotion, Catbomb has been putting together some badass shows lately, so this was ultimately a no-brainer.

Death Mold, first on the bill, canceled at the last minute, taking with them all the mildewed witticisms I had in store. In their place we got a micro-set from GetOverHere!, an Unmen side-project inspired by a deep love of Mortal Kombat and its assorted finishing moves. Sporting a straight ahead, classic grind sound with a bit of brutality, GetOverHere! cranked out brief blasts of thudding riffage and growled gurgles. It was a perfect warm-up for the evening and an excellent performance for a last minute save. 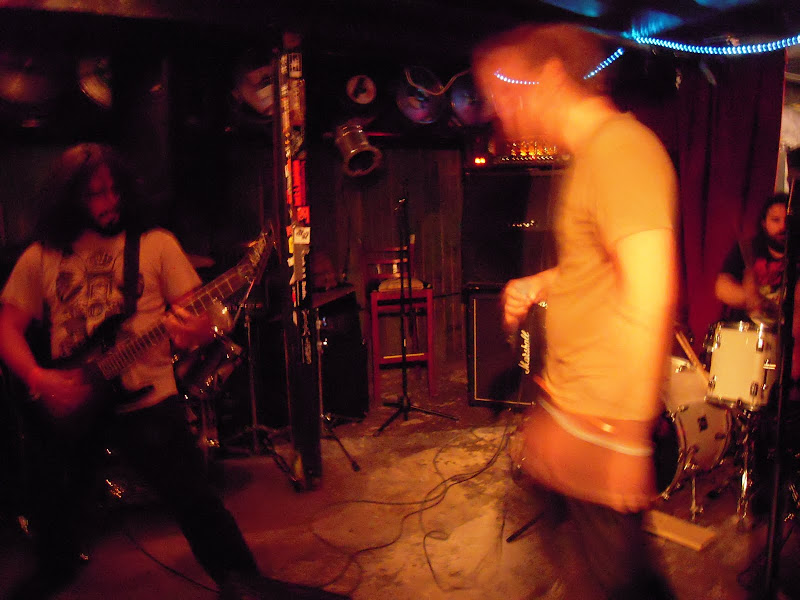 Unmen unleashed a cacophonous grinding assault, shattering ear drums and getting some decent action from the surprisingly large crowd. While the band bowled austere riffage and gutterball grooves, vocalist Timm Sparks flew straight over the cuckoo's nest. The guy punched himself in the face repeatedly with the microphone while issuing demented screams in a stunning display of non-restraint. At one point he forsook amplification altogether, tearing across the room, screaming uncontrollably. Turns out he didn't need a PA after all. 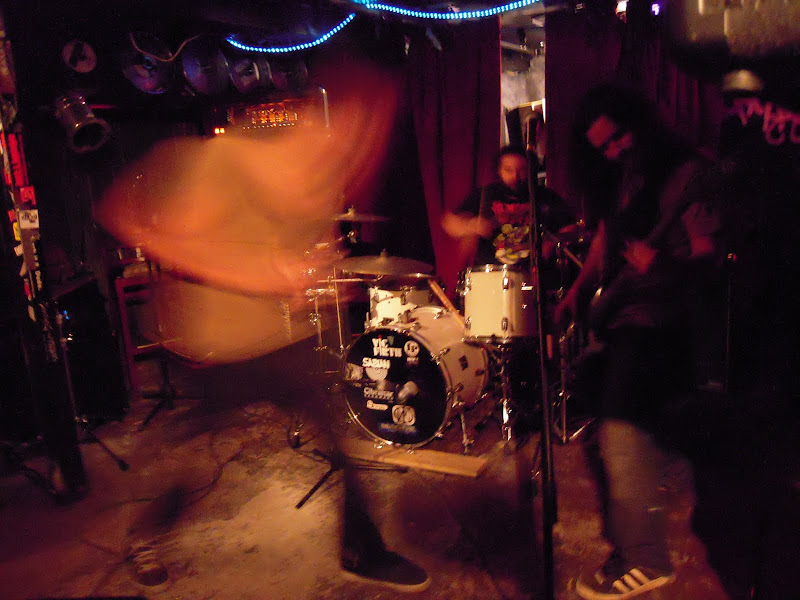 Unmen choose a more dissonant take on classic grind, sprouting thrash vibes and power-violent overtones. Bass player Josh Walton jumps in on the vocals to expand the band's vile vocal palate while Marco Caruso leads the band down rhythmic paths that beg you to dance. Their set was certainly fun; I was compelled to pick up the band's demo afterward. Guitar player Jeremy Suria is also an incredible artist. I bought a pile of stickers and a T-shirt with some crazy illustrations for dirt cheap. (I hear his artistry skills are for hire.) 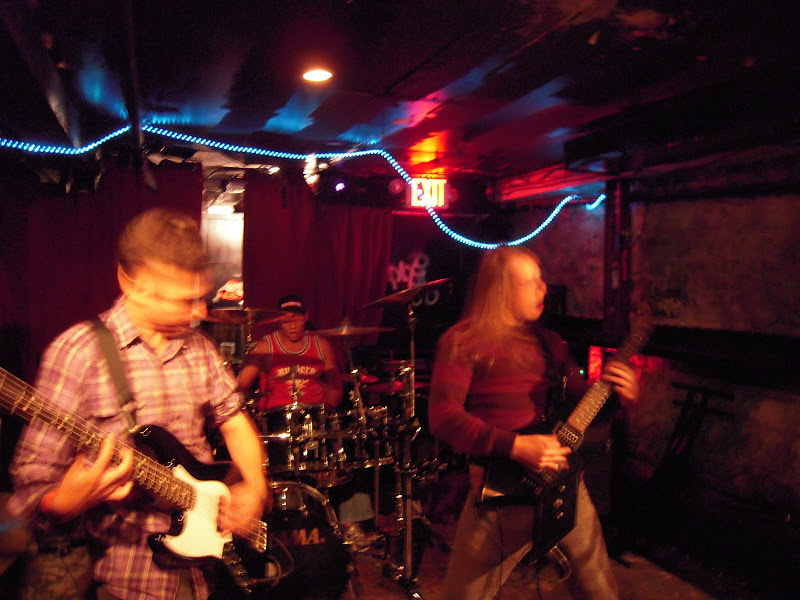 The last time I saw Flourishing my evening was cut short by the gods of public transportation, so I was quite looking forward to a repeat performance. The band threw down a set of mostly new material, a bold move showcasing their creative momentum. Guitar player and vocalist Garett Bussanick also plays in Wetnurse, but it doesn't seem to have injured the flow of new ideas in Flourishing.


Flourishing thrive on rhythmic diversity, and these new tracks displayed the full force of their attack. Drummer Brian Corcoran extracted an absurd perfection from his massive kit with seeming ease. Eric Rizk hammered out bass lines that alternate between complex melodic counterpoint and rhythmic augmentation of the drumming. Garett Bussanick seems to have concocted a fresh set of riffs that slip and slide lithely between melody and discordance. His vocal performance is still a maniacally over-caffeinated trip, with careening howls augmented by some newly clean speaking/singing. “Snake Charmer,” closed out the set as the sole crushing representative of their debut EP. I'm dying to hear their upcoming full length. Look for that to explode next year.


Streetwalker are out on tour, having successfully survived their trip from Seattle. Their punk inflected, thrashing grind assault is shockingly coherent and entertaining. Streetwalker feature a triple vocal attack; guitar player Chris Napolitano and Bassist Brandon Curry both toss in yells while Jacqui Alberts takes the lead with throat ripping screams. The band promised a “delicious set” and delivered the flavor, opening with “We Can't Win”off their latest album, Revelling In The Din of Humanity. I picked up the CD after the show, and it's absolutely worth checking out. 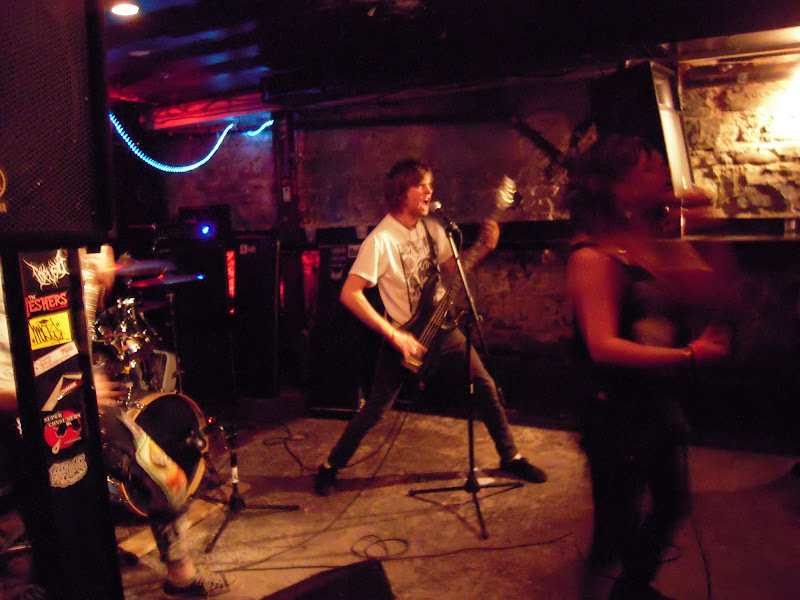 The inebriated crowd was a sloppy moshing mess. Several fine fellows appeared to actually be wrestling on the floor, their heads narrowly missing the steel beams that hold up the bar above. Jacqui Alberts' flying dreads formed a shield in front of the band, holding the raucous mob at bay. Folks felt free to scream out ridiculous requests, including a repeated call for a cover of “Dream Weaver.” It didn't happen.


Several songs were prefaced with explanations. “Pine Box,” a killer track, is about a man who hangs himself after being falsely accused of rape. Another song was about being locked up in the mental ward of a Seattle hospital. Good times.


Joe Rizzi carved a deadly rhythmic swath with his drumming, leading a charge that often swerved into realms of death metal to my ears. These tunes are entertainingly eclectic without sounding desultory. I heard strains of everything from Napalm Death to Obituary to waves of hardcore punk. It was in fact a vicious and delicious dish. Streetwalker are definitely worth your time. Their North American tour continues back west for another couple of weeks. Catch them if you can.
Flourishing GetOverHere Streetwalker The Charleston Unmen