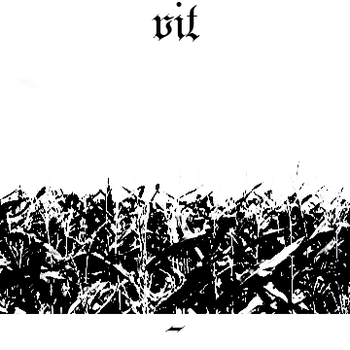 (Yes, the album title is simply the character '-')

Vit traffic in only the starkest transpositions of murk and luminosity, haste and lethargy, despair and enlightenment. Clean guitar tracks explore cobwebbed corners of Americana, punctuating a death march of sludgy doom and passages of swifter blackness. All of this is conveyed with the utmost immediacy via tremendous riffs, even when moving at the most funereal of paces. These dichotomies extend deep into the lyrical content. The album chronicles the rituals of a cult who hope to awaken an ancient, Cthulhuesque god via self-sacrifice, achieving metaphysical revelation in the process. Weighed against that illumination is the soul crushing emptiness of the human experience, magnified by the knowledge that you exist only to augment this elder god's strength.

The interplay between major and minor scales is a prime vehicle for the album's contradictory forces. “The Ardour Of Saints” kicks things off with a grungy, upbeat and infectious series of chords. The song engenders feelings of hope and tranquility, even while driven by thundering drums. But that sentiment doesn't last. As the song draws to a close you can hear the chords decaying before your ears, notes slowly dripping from major scales down into dark harmonic dissonance. The result is gorgeously repulsive.

With little warning you're dropped into the crushing, lumbering riff that drives “Swansylvania.” Scathing vocals join the fray, and we get a taste of the abysmal torpor that pervades the album. The songs don't move with such a consistently sluggish languor, however. We witness the first outburst of speed as the track ends in a barrage of blastbeats. Sudden acceleration and deceleration are another hallmark of the opposing aesthetics Vit masterfully meld.

“The Ascension Ritual” enters with a strange set of stringed instruments, perhaps including a 12-string guitar and a ukulele. The excellent piece evokes sepia images of rural America and draws us further into the fold of the cult, who are purported to dwell in Swansylvania, Ohio (along with the band). The track meanders through strange and compelling chord formations before cascading into a distorted, double bass-driven monstrosity.

These compositions consistently breathe, move and mutate. The guitar work here is preternaturally creative, with memorable riffs parleyed in numerous voices. Lumbering, funereal doom is the prime mode of operation, but crushing syncopated and thrashy riffs are often interspersed with bouncy Opethian chord changes. Swifter sections often slide into the domain of ambient or even orthodox black metal.

The production on the album is crisp and spacious. The drumming ranges from subtle to pummeling, consistently incisive at any velocity. The vocalist's throaty croak is surprisingly comprehensible as it drapes a layer of filth over these tracks. His commanding attack and sepulchral enunciation beg for a deeper look at the lyrical content. Although the album is available digitally through Bandcamp, you'll only get a glimpse of the brilliant lyrics and ritualistic zeal of this cult by purchasing the wooden box set version of the album (affordably available from the band). Each box set comes with individually crafted lyrical inserts, replete with instructions for the cult's rituals. No two inserts are alike.

This is quite frankly a stunning debut album, simultaneously professional, compelling, hypnotic and unique. Vit excavate a perfect cross section of everything I find worthwhile in metal at the moment. If I ran a record label I'd get Vit on the phone and try to snatch this up to get it pressed and distributed posthaste.

You can stream the entire album below:


Vit will be out on a short U.S. tour with Vestiges at the end of December.