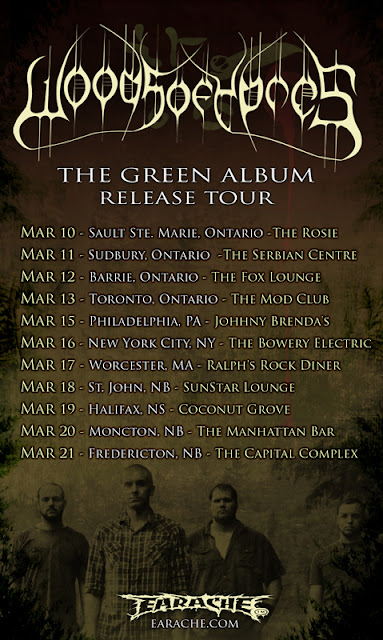 Woods of Ypres have been my frequent audio companions of late, and it was time to consummate the relationship with a live performance. I approached this show with a good bit of trepidation. Would the band's melodic take on blackened doom translate in person? Would David Gold be able to reproduce those dispiriting clean vocals on stage? Yes, and yes, thank you very much.

After local hard rock band MP Project (featuring Mike Pacheco of Mortal Remains) played a fun, competent, if not entirely incongruous set, Brooklyn's Gwynbleidd set up. I've heard their name floating around for a couple of years, but never managed to cross their path. The band's folky, melodic, deathy doom came across quite well, aided by excellent sound and an enthusiastic crowd. Gwynbleidd's performance betrayed a bit of rust, but that was quickly shaken off. Their music was appreciably well crafted, with Opethian flourishes that made for an impressive first listen. The set was comprised of material from the band's debut EP and most recent album, Nostalgia, in addition to a new track, captured below.

Woods of Ypres kicked off their set with the blistering and bouncy “Sham of Optimism,” from their debut EP, Against the Seasons. “Everything I Touch Turns To Gold (Then To Coal)” followed, showing that David Gold's deep, clean vocals convey the same vast desolation in person. Earache reissued the band's most recent LP, Woods 4 – The Green Album, and I was expecting a set heavy on its tracks (I sang the album's praises here). We certainly got a good helping of Woods 4 tracks, but we were also treated to a fine selection of older songs.

The band fired on all cylinders, producing a devastating, full and crunchy live sound. Evan Madden's drum performance was shockingly deft and energetic. His brother Shane pitched in screamed vocals on several tracks, demonically dominating the center of the stage. The nearly perfect sound helped convey an incredibly heavy atmosphere. The modest crowd seemed just as enthralled by the proceedings as myself, with many heads banging throughout the night.

Although partially obscured by darkness throughout the set, David Gold was clearly the ringleader of this morose metal machine. He churned out mesmerizing riffs while delivering pitch perfect melancholy and savage, inhuman screams. A rousing rendition of “Wet Leather” sounded particularly pessimistic. Woods 4 tracks such as “Pining (For You),” and “By The Time You Read This (I Will Already By Dead)” ran the full gamut of emotional annihilation. The incredible set showcased the paradoxical message inherent in these songs (that which does not kill you only makes you stronger). Interestingly, the band closed out the show with the the extended bellicose balladry of “A Meeting Place and Time,” from their debut EP. Repeated calls for “one more song” brought the band back out for a crushing encore of “Your Ontario Town is a Burial Ground.”

All of my questions regarding Woods of Ypres were affirmatively answered; they slay in person. I recorded audio of the set and have been listening to it repeatedly ever since. The show really was that good.