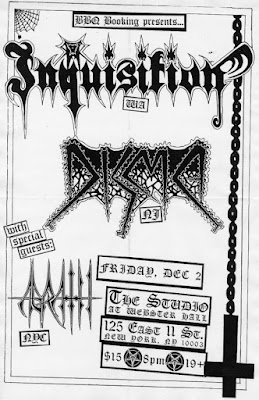 Black metal doesn't always translate well to a live setting.  When it does, the resulting atmosphere is rarely jubilant.  Friday night, however, had a celebratory aura.  Inquisition and Disma sport diametrically opposed sounds, but the low and slow played incredibly well against the rapid and ripping.  By the end of the evening my face hurt as much as my neck; you aren't supposed to smile so much at metal shows.

I descended into Webster Hall's basement half-way through Agrath's set.  The subterranean space was jampacked with humanity; this tremendous bill flushed all manner of folk from the woodwork.  Agrath's orthodox take on black metal was sonically pleasing if not terribly original. The outstanding rhythm section, however, whet my appetite for annihilation.

Disma are acquiring a rabid fan-base.  The band's amiable, ordinary Jersey-guy vibe is particularly endearing.  Then, of course, there's the music.  Disma's crepitating old-school death expectorations are easy to appreciate.  Excellent sound conveyed the crawling, crushing immensity of their songs especially well on this night.  The sweltering crowd ate up the set, reciprocating the pulverizing intensity with appreciative howls.  “Chasm of Oceanus” spawned a lively, communal slow motion headbang.  The entire room experienced an involuntary, synchronized catharsis; the image is blissfully burned in my mind.  During the slowest instrumental moments, Craig Pillard would crouch down on the stage with an agonized look on his face; it appeared as if he could barely contain the demons that his vocals unleash. The crowd was more than willing to devour those growling apparitions. Absolutely righteous.

This was my first taste of the live Inquisition experience.  I was braced for disappointment; I've learned to reign in overactive optimism in my old age.  The band's music is a thesis in majestic black metal mastery.  Ominous Doctrines Of The Perpetual Mystical Macrocosm is one of last year's best albums (or this year's, or both).  Would it work on stage?  Yes, it did. Bedecked in meticulous corpse paint, the band spewed victory with every outburst of absurd, astral arpeggiation.  The concise mix transmitted superb sonic fidelity; the duo produce an unbelievably huge sound.  Dagon had a gorgeous, deep and shattering guitar tone; no tinny skinny here.

The crowd erupted into an immediate and massive melee for Inquisition's set.  People seemed surprised by their own violent, rapturous reaction to the music.  I was pummeled and quickly covered from head to toe in beer; it didn't matter one bit.  Folks were crowd surfing, clutching shiny new Inquisition LP's in hand while being crushed up against the ceiling. Claws filled the air, squashing invisible oranges while simultaneously performing the venerable Suffo-chop in time to Incubus’ bludgeoning blastbeats.  It's my new favorite metal gesticulation.

Dagon's reptilian vocals have a peculiar, melodic timbre that I'd never fully appreciated.  This becomes more evident and essential on stage.  Dagon also possesses a theatrical flair that recalls Abbath of Immortal.  Yes, the comparison is all too easy, but it's apt. Having completely surpassed Immortal in quality, Inquisition are on the precipice of massive success.  Judging by our goofy grins, windmilling hair and euphoric glee, they don't have far to go.


You can check out some pictures of the show here and here.
Agrath Disma Inquisition The Studio at Webster Hall