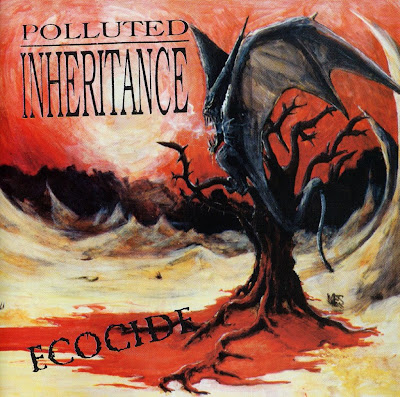 Every once in a very blue moon I’ll throw on an album for the first time and approach that mythical mental vortex where my 17-year-old self and my 34-year-old self agree entirely about said album.  I was led unknowingly to this metal singularity by a blind listen to Ecocide, by Polluted Inheritance.  The album is redolent of Florida and all things recorded there circa 1992.  Think Malevolent Creation’s Retribution circling the pit with Utopia Banished, The End Complete, and a dropkick of Assück’s Anticapital.

While parading around my house, moshing wildly and banging my head with abandon, it occurred to me that Polluted Inheritance might not be the best new death metal band in existence; a fact check was in order.  Lo and behold, Ecocide WAS released in 1992 and has long been out of print. Vic records is re-issuing the album.

Ecocide is a masterful blast of addictive riffs, righteous rhythms, pitch perfect growls, and hilariously blunt lyrics.  Polluted Inheritance are a long lost jewel of the Netherlands and Ecocide is Florida-style death metal mojo incarnate.  The original album was evidently a hot commodity (supposedly fetching over $300 on eBay). I can assure you that had I known of Ecocide’s existence, I would be one of the schmucks queuing up to pay $300 for the CD.

Obviously, Polluted Inheritance never registered on my metal radar; had they done so, this album would be a well-worn highlight of my music collection.  How has this band remained hidden? Why the fuck didn't anyone tell me about them?

Ecocide will be released on February 26th.  Order it here.  Check out a tune below: