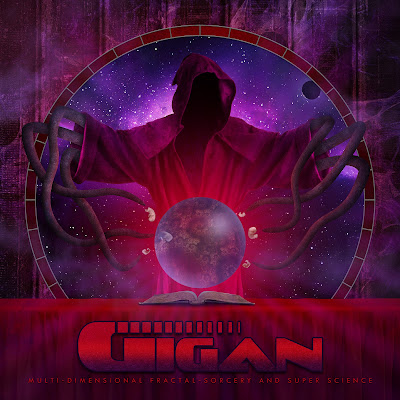 Some albums, like mathematical formulae, require a revelation.  This is what we live for, the moment when an album’s enzymes cause an unlooked for catalytic catharsis.  Gigan’s music has always interested me, but it’s never induced a chemical reaction.  Multi-Dimensional Fractal Sorcery and Super Science changes that in spectacular fashion.

Although typically tagged as tech-death, Gigan just don’t sport a weedily-Wilton aroma on this record.  Eric Hersemann’s careening riffs are borne of wild astral forces, possessing a frantic and frightening immediacy.  These chromatic acrobatics and contortions amaze and delight without turning into a carnival.  The crystalline riffs and perplexing rhythms speak to me in grindcore tongues. I’m hearing whispers of Discordance Axis and Dephosphorus. I like what they’re saying.

Multi-Dimensional Fractal Sorcery and Super Science has a deliberately ornate and alien atmosphere.  Every corner of its soundscape is crawling with intricate minutia; you’ve got to admire the attention to detail. Some of the album’s sparser moments are its finest. “Mother of Toads” feels like the product of a xenomorphic Primus, with a freak tremolized riff riding a barrage of perfectly absurd percussion.

Cold-blooded howls burst from the beating heart of this album.  Eston Browne has perfectly synthesized the venom and brutality he perfected in Salö and Humanity Falls, respectively. The humanity of this cacodemonic rage helps to balance the album’s science and sorcery; I can somehow relate to Gigan’s mystifying madness.

Somewhere along the line, Multi-Dimensional Fractal Sorcery and Super Science swept me up in its anomalous onslaught.  It took a few spins for the epiphany to occur, but I’ve been craving these cryptic transmissions and vicious grooves ever since.  Perhaps you, too, can become a vessel of these cosmic communications.

Multi-Dimensional Fractal Sorcery and Super Science is out on October 15th via Willowtip.  You can stream the entire album here.