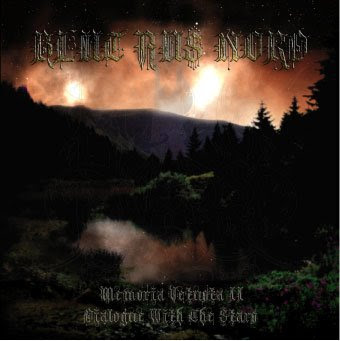 This is my first taste of the Blut aus Nord, and it is scrumptious. Blut aus Nord hail from Mondeville France, and play melodic, semi-symphonic black metal. My first impression is an Anthems to the Welkin at Dusk vibe, but it doesn't ring true. Much more attention is paid here to the arpeggiated melodies, and there is not nearly as much speed as on an Emperor album. The excellent guitar work and strange chord structures also bring to mind Enslaved's Mardraum (my favorite Enslaved album). Synthesized symphonic sounds (mostly strings) can be found deep in the back of the mix. In addition, almost operatic male singing is hiding in the background. Any further forward, and these elements might bring a whiff of Dimmu cheese. Fortunately, it all comes together nicely.
There are plenty of clean/acoustic sections with competent neo-psychedelic guitar solos or keyboards. But like I said - fromage free. The rhythm section holds its own, but as black metal is wont, the beats rarely change.
The band are evidently secretive, and rarely publish their lyrics. Based on guitarist/vocalist Vindsval's public comments, however, the music is not of the satanic variety. He has stated (in decibel) that "if black metal is just this subversive feeling and not a basic music style, then Blut aus Nord is a black metal act." The song titles are appropriately esoteric, and even name drop several Buddhist (pali) words such as Ānāpānasati and Vipassanā. Sounds good to me.
While the album remains interesting throughout, Memoria Vetusta II is one of those albums I can use to block out background noise while I sleep on the train. Not that that's a bad thing, but it certainly doesn't make you move.