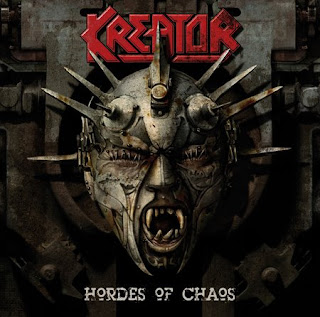 As a young patron of metal, I obtained a copy of Kreator's Coma Of Souls. At the time, I found little to like about it. I recall it sounding repetitive and uninspiring. I have no idea what ever happened to that CD. Flash forward to 2005, where Kreator's newest album Enemy of God comes highly recommended. The timing was unfortunate. Produced by Andy Sneap, the sound turned me off immediately. For a few years, every album the man touched sounded exactly the same - Nevermore, Arch Enemy, Testament, Machine Head, etc. It seemed that Andy Sneap had a computer program that could churn out soulless, over-compressed metal albums without a band even needing to participate. Vocals could be mailed in. Sure, they sounded heavy as heck, but all melody and nuance were crushed by the mix. Enemy of God was a low point of that era for me.
I'm blown away by the Kreator's new release, Hordes of Chaos. Something sounds totally different. This thing swings and thrashes with distinctive riffs and ripping melodies. It's no surprise to find out, then, that the band recorded all the basic tracks together live in the studio. The end result is an organic metal beast. If this doesn't make your head bang then you should hang it up and retire.
I've honestly never been a fan of "pure thrash." I probably never will be, but this is an album I can get behind. Frontman Mille Petrozza's vocals are par for the course. The subject material is rousing social commentary on war, corrupt politicians and government propaganda. Sure, I can do that.
Most of all, this album makes me want to see Kreator live. I'm hoping to do that in April on their North American tour with Exodus, Belphegor and Warbringer.