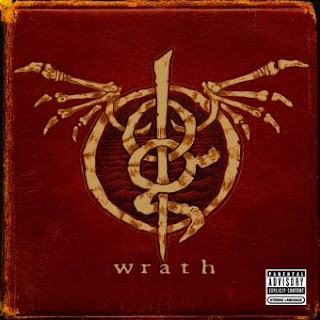 The sound on this album is huge and pummeling. Unfortunately, I'm pretty disappointed with Wrath. Drummer Chris Adler puts in another preposterously awesome performance. Randy Blythe's vocals have progressed in a satisfying direction. The problem is that the songwriting and especially the guitar riffs are lackluster. Guitarists Mark Morton and Willie Adler sound fairly uninspired. The riffing, when compared to Lamb Of God's previous work, just isn't up to par.
The most interesting parts of this album end up being the strange instrumental interludes and song intros. Extremely melodic sections with soaring guitar melodies make me think Mark Morton and Willie Adler would rather be off doing something other than churning out thrash riffs all day. Some cool sections expand on the ambient guitar vibe that first appeared on the song "Descending" on Sacrament. On "In Your Words," an extended melodic section reminds me of the boring part of an Opeth song. The guitar solos are surprisingly sparse and unmemorable.
It's not that this is a bad album, it just isn't that interesting to me. Wrath tries pretty hard to make up for its shortcomings in pure intensity, but it falls short. I'm sure these songs will hold up well in a live setting, but there's not much of a reason for me to come back to this in the future.
On a lighter note, I ordered the "deluxe" version of the album. I sat down on Wednesday to check out the bonus disc. I popped it into my DVD player, and was shocked to hear only the disembodied and isolated sounds of the instruments and vocals coming out of my speakers. Each track on the CD is a discrete part of the final mix. I didn't read the fine print. I thought this was going to be another antic-filled "making of" DVD. Not so.
What am I supposed to do with this? Should I mix Randy Blythe's vocals along with a polka jamboree? Could I take the drum tracks and try to come up with cooler riffs myself? I doubt it. Maybe my brother the audio engineer could do something funny with this stuff. For me, it certainly wasn't worth the extra couple of bucks. The saddest thing is that listening to the individual guitar tracks accentuates how uninspired they really are.