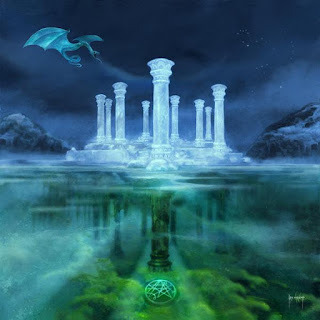 I picked up Absu's Tara in 2001 after reading a glowing review in Chronicles of Chaos. The album was positively insane. At the time, I really didn't identify this music as Black Metal. Absu hailed from Texas, after all. The gigantic and ponderous CD booklet explained that Absu played "mythological occult metal." The ridiculous speed and thrashy riffs set Absu apart from anything I was listening to at the time. Absu disappeared for years, but Tara remained a high point of my music collection. Fast forward to 2009, and Absu re-emerge out of the depths to give us their new, self titled album. Main-man Proscriptor McGovern remains, but the lineup has completely shifted around him. Since I always thought Tara was primarily driven by the riffing, it would seem that the loss of guitarist Shaftiel should have signaled a change in direction (and quality) for Absu. Not so. I guess Absu really are driven by the monstrous drumming and vocals of Proscriptor more than anything else.
The first change that I notice on Absu is a more prominent use of keyboards. It starts out dangerously at first, but they remain tasteful throughout, avoiding Stilton levels. There are more slowed down and epic parts to these songs, which definitely adds a flavor that had been previously missing. The riffing is generally excellent. The hyper-speed, thrashy Black Metal style maintains the previously established character of the band. There are some immense solos on this thing as well.
If I had to pick a modern analogue for Absu's sound, it would have to be 1349. Absu are probably a little bit more interesting to me in the end, though. You can always pick out the instruments in the production here. The guitars and drums have a unique feel that your usual Black Metal recording can't really capture.
I think Absu ends up suffering from the same issue that Tara did. The album feels absurdly long, and it can wear on you after a protracted listening. Yes, there is a small hint of monotony here. Not to worry, it still slays.
Absu may not beat out Tara in my eyes, but it is an excellent progression.

Absu are touring the US in June as part of a Candlelight tour package.