It's Not So Quiet - Cannibal Corpse, Björk and a Tech Death Revival 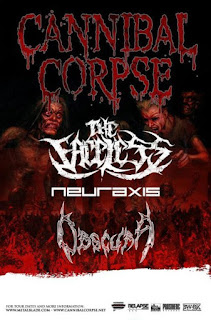 I'm incredibly psyched for the upcoming Cannibal Corpse tour. I'm not actually interested in Cannibal Corpse themselves - I've seen them too many times, and I seem to have lost the tolerance for their gore obsessed shtick in my old age. Rather, I'm excited for the trifecta of fantastic Technical/Melodic Death Metal bands opening for them. The Faceless, Neuraxis and Obscura harken back to a more pure era of metal. They seem to be harbingers of an untrendy, humble revival of Chuck Shuldiner's ethos.
The last time I saw Cannibal Corpse was on the Bloodthirst tour in 2000 at L'Amour in Brooklyn. Nile was the opener. They participated in pretty much every metal tour for a good five straight years there.
Anyway, after Cannibal Corpse came on, my brother Frank and I noticed quite a commotion in the sound booth. We were standing right in front of it, as that was pretty much the only place in L'Amour where you could hear a damned thing.
In the sound booth, we saw a diminutive female figure, headbanging like all hell. After a little while, we realized this metal thrashing mad woman was Björk. No shitting. At a Cannibal Corpse concert. Her headbanging skills would impress Johan Hegg. For truth.
As if this weren't enough, she was screaming like crazy between songs. She even yelled in approval as George "Corpsegrinder" Fisher explained that the song "Stripped, Raped and Strangled" was "for the ladies." What the holy hell?
Frank, displaying quite a pair, went up to her in between songs and introduced himself. He confirmed that she was indeed Björk and got her to sign his ticket.
I can't envision anything so bizarre happening when these guys play at The Chance in Poughkeepsie, but I'll keep an eye out for interdimensional aliens.

I'll leave you with some videos of the aforementioned bands: