Wolves in the Throne Room - Malevolent Grain EP (Self Released, 2009) 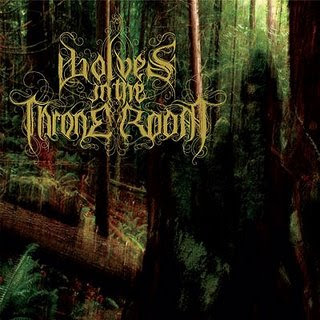 This was released earlier in the year on vinyl through Southern Lord. The band self released the CD version, which came in the mail a couple of days ago. It's always entertaining and strange to receive a package directly from a band, with the return address of a band member illegibly scrawled on the envelope.
Right off the bat, I have to say I was a huge fan of Two Hunters. It was probably my favorite album of 2007. Despite my efforts, I seem to have been unable to convince a single one of my metal compatriots that Wolves in the Throne Room are awesomeness. I don't think Malevolent Grain will help in that quest.
I rarely torture my wife by making her listen to this kind of stuff, but I figured I'd throw on this EP and see what happened. I think her initial impressions sum up my thoughts on the first song. After listening to "A Looming Resonance" for a while, she said "This could be a lot more interesting."
Indeed. Female vocals by Jamie Myers accompany what seems to be a singular droning riff, played with varying intensity, for 13 minutes. This aesthetic is nothing new for Wolves in the Throne Room, but here it seems to cross a line. I can still appreciate the hypnotic beauty of the thing, but it's just not up to the standards of Two Hunters. It's certainly not as interesting. The drumming, as usual, is excellent, and is the sole dynamic force in the song.
The second song, "Hate Crystal," sounds a little bit more familiar. Blasting drums join another ambient riff, but are now accompanied by Nathan Weaver's blood curdling screech. This is much more black metal, at the very least. There are more dynamics to the guitar work, but it's still not very exciting.
I'm pretty disappointed by Malevolent Grain, but not enough to be discouraged. I'm still looking forward their upcoming full length, Black Cascade. (Yes, I know it leaked.) The truth is, there are plenty of American black metal bands who have picked up on this ambient, post-Burzum style and run with it. My favorite one-man American black metal band of the moment, Deafest, seems to be able to churn out more interesting riffage by the boatload. Who knows, maybe I'm missing the point.