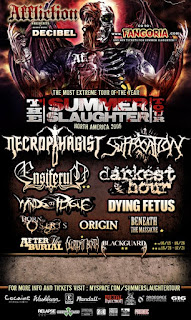 I just updated the NYC area metal concert calendar in a major way. There are a metric ton of metal shows in the next couple of months.
Somehow I had managed to leave off the Gojira show that's coming up in a couple of weeks at the Blender Theater.
I'm pretty psyched that Atheist will be playing at B.B. King's in July with The Faceless. Atheist are on that diminishing list of bands I need to see before I die.
The Summer Slaughter dates are now on there. I can't believe this tour is going to play two nights at Irving Plaza in July. Do they really think it will draw that many people? You'd like to think that Suffocation will headline over Necrophagist in their home town, but we'll have to see.
Pelican and Tombs are now opening up for Isis. I'm not a fan of Isis, but I'll probably go to the show at Irving Plaza anyway. I haven't seen Tombs yet, so it should be worth it.
I straightened out the bands for the two days of the Auditory Assault festival in Brooklyn.
I added the Kylesa/Stinking Lizaveta show at the Cake Shop that Cosmo Lee mentioned here.
Lastly, I added shows for Trap Them, Zoroaster and Goatwhore.

Tonight there are a couple of great shows. Amon Amarth is playing at the Starland Ballroom in New Jersey with Goatwhore, Skeletonwitch and Lazarus AD. I'll be heading up to The Chance to see The Faceless, Neuraxis and Obscura open up for Cannibal Corpse.

So much metal, so little time.

As always, if you notice anything I'm missing or have screwed up, please e-mail me at the address in my profile.