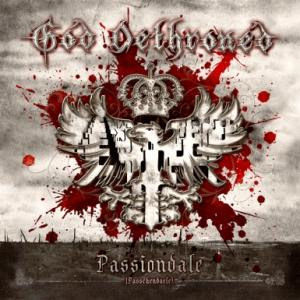 I've really been in the mood for death metal lately. Nothing flashy or technical - just bread and butter death with some melodic sauce.
I've been totally stoked about the latest God Dethroned album, Passiondale. After seeing news that they'd be touring North America this fall, I figured it was high time to check out their back catalog. On Passiondale, God Dethroned are reunited with drummer Roel Sanders. I've read a couple of interviews with main-man Henri Sattler where he talks about how the band has renewed the fire they had on their early albums. In particular, he mentions The Grand Grimoire (1998) and Bloody Blasphemy (1999) - albums Roel Sanders originally played drums on. I thought that would be a good place to start. 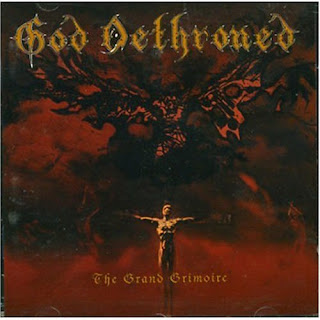 Both albums are fantastic. The Grand Grimoire probably bears the most resemblance to Passiondale. The album has a satisfying death metal sound, with tinges of blackness and some nice melodies that don't emit a single whiff of cheese. I really like Henri Sattler's vocals here. Memorable choruses and sensible song structures are a good sign. A lot of times I get a Once Sent From The Golden Hall vibe, which is extraordinary. At other times the tunes tremolo out and make me think of Dissection. Can't go wrong there.
Bloody Blasphemy shows some signs of progress, but the sound is still excellent. There are few sections of clean vocals that add flavor. The rhythms are a little bit quicker and blacker, but still exhibit excellent riffing and memorable melodies. I'm impressed. 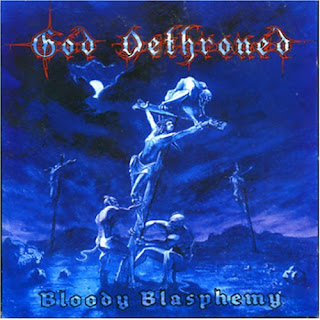 So why didn't I ever get into God Dethroned in this era? I have no idea, to be honest. I definitely saw the band live at some point, but it just didn't register. Naturally, the lyrics are of a blasphemous nature, but they don't seem to take the shtick too seriously (as is evidenced by their latest output.)
I never seem to stop finding bands I like. It's one of my favorite things about metal. No matter how big my CD collection gets, there is always something new to discover. I'm sure my wife would disagree with this sentiment.
Needless to say, I'll be checking out God Dethroned on tour this fall.
death metal God Dethroned