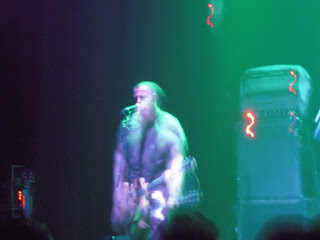 The trek to this show started on an excellent note. On the train ride down I made the acquaintance of fellow Peekskill metal aficionado Cory Monster. Seeing a dude walking around here in a Trap Them shirt and Bolt Thrower hat is like a Sasquatch sighting.

I met up with Jeanne Fury inside the Blender Theater and prepared for a Tombs pummeling. The sparse crowd started to fill in by the time Mike Hill and co. took the stage. With the usual lack of stage banter the threesome threw down an excellent set. I'm assuming that at least several of the songs were new, as I didn't recognize them. These possible new tracks were fantastic, foreshadowing great things from these guys. The couple of songs they tossed in from Winter Hours sounded excellent. Again, drummer Andrew Hernandez was fucking insane. The drum sound was perfect, and the guy just stood up and pounded the shit out of his kit. Fucking nuclear. 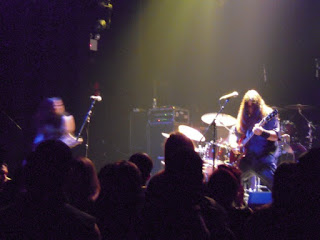 Black Anvil came out next to set up. There is something so perfect about Gary Bennett's guitar tone that even sound check ruled. Black Anvil fucking slaughtered. Paul Delaney screamed like a madman and wielded his bass like an axe. I'm sure that if anyone managed to get on stage, he would have cut them in half. Raeph Glicken's drumming was fantastic, and pounded home the awesomeness of this set.

The sound was excellent, and did justice to the numerous tracks off Time Insults The Mind. The crowd responded well and a pit opened up. It was one of those performances that would shock the uninitiated into noticing. I'm sure Black Anvil made many new fans this night. There's no denying the power of excellent riffage and insane live energy. The band played one new song that was killer. Perhaps more complex than their past work, but certainly reason to be psyched for their next album on Relapse. 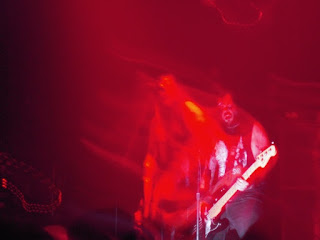 During Black Anvil's set, I witnessed one of the most sicking pit injuries ever to occur. As I've mentioned before, the floor of The Blender Theater is slanted down towards the stage. In addition, it's just painted concrete, and the second it gets wet, people start taking spills. One very tall and large dude who was dancing by himself went down hard. In doing so he performed a full split, with one leg twisting out awkwardly behind him. If he didn't tear every muscle in his groin, he must have blown a hammie or torn an ACL. I hope he has health insurance. It was like a slow motion replay of a horrific sports injury.

Withered came out next and performed a set of their patented bearded blackness. I've failed to really get into them for some reason, and the very muddy sound didn't help much. The crowd, for their part, seemed very much into it.

Marduk took their sweet time setting up, but it was worth the wait. The mix was excellent, and the guitar sounded excellent despite the presence of only one guitar player. Mortuus sounded ridiculously good, and his authoritative frog croak incited a full on riot in the audience. Numerous bodies surfed above the pit. I'm only particularly familiar with Marduk's last few albums, but old tracks and new sounded fantastic here. Needless to say, the spectacle was worth the price of admission.