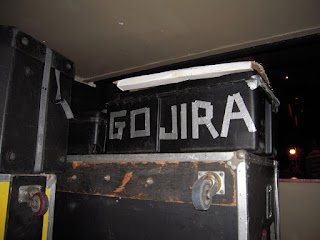 It was my first outing to this Brooklyn venue. I met up with my brother Rich and and the intrepid Jeanne Fury before the show. I wasn't surprised to find a building close in spirit to The Bowery Ballroom, one of my favorite NYC venues.

They corralled us in the basement bar for a while, as per Bowery standards. A line of eager beavers champed at the bit, waiting to get into the main room. Gojira inspires a deep sense of bromance among their fans, and these dudes exuded anxious excitement in their hopes of being front and center for the Duplantier special. I'm always super psyched for some Gojira, but it was Burst who stole my heart on this evening.

When they let us out of the bar, I moseyed over to the Burst merch table. I was psyched when my Katatonia shirt was complimented, but it took me a few moments to realize that I was talking to Burst singer Linus Jägerskog. The dude was ridiculously cool, normal and nice. We chatted a bit about the disastrous start to their first (and last?) U.S. tour. Having already missed two shows due to their DOA tour bus, Linus admitted that the tour was already guaranteed to be a financial disaster for the band. With an almost conspiratorial smile, he said he hoped that now they'd just be doing the tour for the fun of it and for the fans. Right on.

Zoroaster came out first, and played a decent set of their doomified sludgery. Troubled by a few technical difficulties, the band didn't seem particularly pleased. Their sound is not my cup of tea, so neither was I. 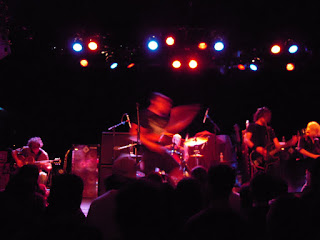 Burst came out to some epic movie soundtrack that I know but couldn't name. The band didn't have a lot of space to move. Linus came out on stage looking ridiculously excited and used every inch of space to pace. Jonas and Jesper assumed standard metal poses while Robert Reinholdz spent the entire show seated at stage left. The man looked like he was already seceding from the band.

They launched straight into "(We Watched) The Silver Rain." Burst fucking ruled. From the first notes, I headbanged so hard that I launched my own glasses (they were successfully recovered.) Righteous. The sound was loud but excellent, and they absolutely killed the 40 minute set. The crowd wasn't totally filled in when they went on, and clearly a good many folks had no idea who Burst were.

"Where the Wave Broke" slaughtered, and Linus' enthusiasm was completely infectious. He tore up the stage like a madman. By the time it was over, there was a smile on pretty much everyone's face. After a track from Prey on Life, "I Hold Vertigo" closed out the set with brutal delicacy. It's a shame Burst are going on "indefinite hiatus." Based on the converts they made this evening, I really think they could have done well in the states. I got a chance to see Linus again at the merch table and expressed my gratitude for some righteous metal.

By the time Gojira turned down the lights, the place was packed. As the first notes of "Oroborus" kicked in, the crowd went berserk. My brother Rich once again disappeared into a writhing Gojira pit. 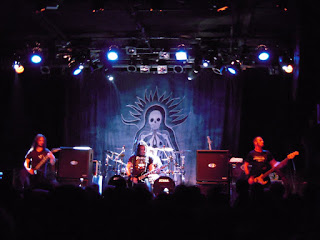 A couple of things struck me about the set. The band was just as animated as the show back in May, but Joe Duplantier's stage banter revealed a not-so-subtle road weariness. I think Gojira have reached that point where they know folks are going to show up and thrash when they play. Now they can go so far as to make demands of the crowd - ask them to be louder, be more animated and tear shit up harder. This isn't necessarily a bad thing, but it gives the show a different vibe than before.

Having said that, it was an intense and awesome performance. I was incredibly psyched that the setlist contained so many From Mars To Sirius tracks. "Ocean Planet" put a smile on my face and "Where Dragons Dwell" was pure insanity. "Vacuity" is still an excellent closer. In the end, the crowd was perhaps a little bit more intense than the last show, if that can be believed. All told, an excellent night.

Here's a video I filmed of "Ocean Planet:"