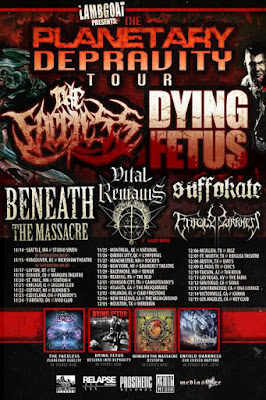 The marquee on The Blender Theater read "FACELESS SATURDAY." Co-headliners Dying Fetus apparently didn't make the cut; their name must not be safe for the masses on 23rd street. The goof ended up being indicative of the billing iniquity on this night.

I got to the show just in time to see Dying Fetus set up. I've never been a huge fan of the band, but through the years I've come to appreciate the intensity of their live shows. The venue was packed. I was surprised at the turnout. Evidently, Dying Fetus have a lot of fans in New York City.

As would be expected, the crowd was insane for Dying Fetus' set. It was definitely the most energetic pit I've witnessed this year. Bodies were in perpetual motion, and there wasn't much room for the martial arts displays that irk so many people. The hour long performance covered a wide swath of the band's discography. Only "Your Treachery Will Die With You" and "Shepherd's Commandment" represented their new album, Descend into Depravity.

The mix was excellent, and the band sounded tremendous as a three-piece. John Gallagher's guitar tone was massive, and I honestly think the new tracks sounded better than they do on the album. Sean Beasley was a raging mass of hair, and Trey Williams was rhythmic perfection behind the kit. Visibly happy with the crowd reaction, Dying Fetus closed out the set with the requisite "Praise the Lord (Opium of the Masses)." People were going nuts.

While The Faceless set up, the venue started to clear out. A decent amount of people actually left. It became clear there must be an age gap in the fans of these two bands. The crowd that filled up the floor for The Faceless was a good many years younger than it had been earlier. The Faceless had promised to play their latest album, Planetary Duality, in its entirety during this tour. That is what got me to come out to this show at all.

As the lights went down, The Faceless launched into "Akeldama," which is essentially a progged out tech-death jam. With a brief introduction, the band launched into "Prison Born" and proceeded to work their way through Planetary Duality.

The band have worked on their stage presence a bit. Derek Rydquist was far more animated than the last time I saw him. He has transformed from a unabomber type figure into an all-out vocal maniac.

"The Ancient Covenant" sounded fantastic - the mix was gorgeous. Michael Keene's distinctive guitar wizardry was front and center. His leads display an absurd sense of melody that blows me away.

The crowd had a problem keeping up with the music. The Faceless inhabit a weird dimension between complete death metal brutality and progressive technical wankery. I think they've found pure gold in that balance, bringing fantastic songwriting skills and a bit of soul to the music. The alien time signatures and demented breakdowns are not pit friendly. Kids will run like wild through the pit for a few moments, and then a shift in the music will leave them standing there with befuddled looks on their faces. This happened over and over during the set.

It was great to hear some of the songs that I hadn't seen live. "Planetary Duality I" and "Planetary Duality II" were fucking incredible. Such a great album. It's definitely worth it to get out and see this thing performed in its entirety. Lyle Cooper's drum performance on the last song was enough to send me into headbanging convulsions. I've mentioned this before, but I honestly think Planetary Duality will go down as a death metal classic.

As much as I enjoyed The Faceless, I've got to say that Dying Fetus owned the evening. There's no question; they should have been on top of this bill. The crowd response for their set was berserk, and it made everything else that came after feel just a bit awkward.

During the show I fumbled my camera and turned it into a brick, so no pictures on this night.