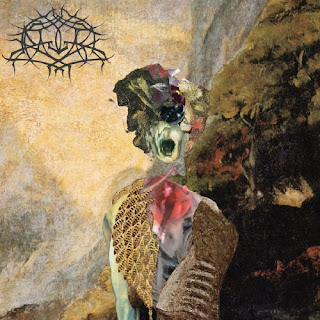 There's nothing simple about this album. Krallice's self-titled debut displayed the same wildly complicated and enthralling brand of black metal, but the music was driven by more easily digestible post-rock melodies. Dimensional Bleedthrough feeds that staccato guitar wizardry through the obfuscation machine. I feel like I could listen to this thing a thousand times and never comprehend all of its nuances. Is it a good album? I personally think so. My suggested point of reference on Krallice is still Weakling. If you dig an esoteric take on black metal with triumphant overtones and a good bit of melody, then you should be all over this.

The tempo of Dimensional Bleedthrough is generally locked in at just short of ludicrous. You can pretty much distinguish each note; this isn't "wall of guitar" black metal. The guitar work of Mick Barr and Colin Marston is just as mind blowing as it was on the self titled album. Sometimes this thing hits plateaus of deliberate drone, but for the most part, it's two guitars doing battle on planes of existence mortal man can't fathom. How do four men sit down and compose this insanity?

Some of the best moments on the album occur when things slide out of overdrive. "untitled" lets the guitars escape from a rhythm section altogether and makes me think of the frozen tundras on Pelican's The Fire in Our Throats Will Beckon the Thaw. "Autocthon" breaks into a galloping thrash with a melody that's simply incredible.

One improvement over their debut is the bass work of Nick McMaster, who joins in the frenzy on tracks like "Monolith of Possession" to add an extra depth to the music. Lev Weinstein's drums are also more varied. "Aridity" has some positively thunderous drum work. At times the rhythm section seems to phase into a pocket universe to create absurd sensations of movement, like looking out the window of a train while facing the wrong direction.

The sparse vocals duties are shared by Mick Barr and Nick McMaster. I really enjoy the whimsically bizarre and frequently poetic lyrics. Neither man sports a particularly original black metal scream, but they're both able to get the job done in a satisfying manner.

Dimensional Bleedthrough is a complicated album that reveals its glory through repeated listens and a certain amount of attention. The melodies are both savory and sweet, giving the album an emotional foothold. Each song is held together by a thematic gravity that prevents these four musicians from flying out of orbit into oblivion. It is a wonder to behold.