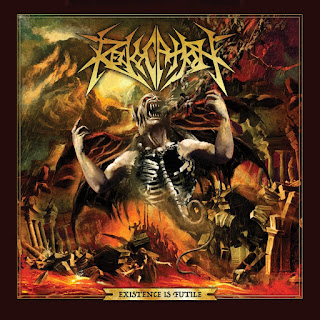 I'm a frequent victim of hype fatigue, and Existence is Futile is certainly one of the most over-hyped albums of 2009. In an astronomically good year for metal, I definitely didn't give this album a fair shake when it first passed my ears.

I was a big fan of Revocation's self-released debut, Empire of the Obscene. That album was an exercise in riffage thrown at the wall; all manner of styles were represented and they all stuck. The riffs and solos on Empire of the Obscene were absurdly awesome, but the album lacked a cohesive sound and didn't display particularly consistent songwriting.

Revocation have achieved cohesion on Existence is Futile. Their sound is a unique blend of groovy thrash, technical and melodic death metal with solos that recall the greatest glory of the 80s. It's almost as if a band like Warbringer spawned alien children with The Fucking Champs.

Songs like “Pestilence Reigns” exhibit Revocation's blueprint. A handful of complex riffs drive the first part of the song. First, semi-melodic chordage slides up and down the guitar neck. Then we get a hammered-on fountain of notes that occasionally kicks into ludicrous speed. Scrumptious grooves sprout up in the transitions between riffs. Then, two and a half minutes in, we get a fascinating melodic riff that mutates into a minute-long solo. The lead is so incredible it overshadows the rest of the song, which kicked a good deal of ass on its own.

At this point, I think we can acknowledge that David Davidson is a guitar deity. Along with Michael Keene of The Faceless, he is the preeminent shredder of this young generation. I'll entertain the frequent Dimebag comparisons, but Mr. Davidson has much to learn as a songwriter. My only gripe with EiF is that the solos completely surpass the riffage at times. These are some transcendent, meaningful and mind-imploding solos. They sometimes make the rest of a song sound pedestrian. Dimebag was a legend because he could write a song where the riffs matched the solos in godliness.

My favorite parts of EiF are the melodic breaks. Hints of The Fucking Champs seep through in these sections and add a levity to the tunes that makes me smile. “Across Forests and Fjords” is four minutes of thrashing instrumental hyperbole that wouldn't be out of place on the legendary IV. See, Revocation aren't only about grim metallic mayhem. There's a sense that these guys love what they're doing, and their joyous enthusiasm is infectious.

EiF is beautifully produced, with an excellent mid-range punch. Phil Dubois' drumming is fantastic, and Anthony Buda's bass gets the proper representation for a three-piece band. In addition to being an axe-master, Mr. Davidson also performs the vocals. Close in spirit and character to Warbringer's John Kevill, the vocals fit well with the music. There is a nice hint of uncontrolled madness to Mr. Davidson's scream/yell.

The key to my enjoyment of this album is just to stop thinking about it. Let the thing move. Let the absurdly dexterous technicality bowl me over and go with the flow. If you want to hear some righteous shredding, this is the place. At the very least, EiF holds my attention throughout. I'm betting Revocation have yet to write their masterpiece. EiF is worth your metal money in 2009, but let's hope even better is in store from these guys.

I'm looking forward to seeing Revocation along with Hypno5e and The Binary code on the “Metal as Art” tour next month.

Here's the video for "Dismantle the Dictator:"