Posted by atanamar January 14, 2010
I made another metal pilgrimage to Brooklyn on Sunday. When Jeanne Fury and I walked into The Knitting Factory, local grinders Humanity Falls were already playing. The venue was surprisingly full. In fact, I think there were already more people there than at last week's Revocation show.

Humanity Falls sounded great. Their demented Gorguts-meets-Scum take on grinding death was entirely entertaining. Front-man Eston Brown appeared to be having quite a bit of fun. Original songs were punctuated by at least one cover. If I'm not mistaken, Napalm Death's “You Suffer” made a brief appearance. Guitarist Ammo Diaz looked completely comfortable with the twisted and agonized cacophony he was producing. Ed Bednarek's solid drumming held the gnarly compositions together quite well. 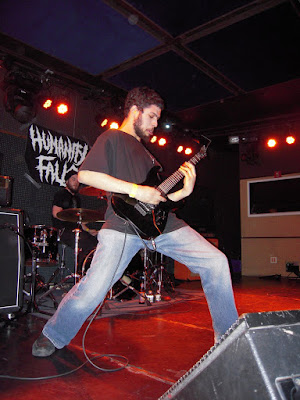 Weirdly, Humanity Falls were the only band with a banner on stage the entire evening. The sound was so great during their set that Eston Brown took a chance to thank the sound person, and asked the crowd to follow suit. Folks were already headbanging to every song. It was definitely a different scene than last week. I suppose the trifecta of local acts helped attendance. 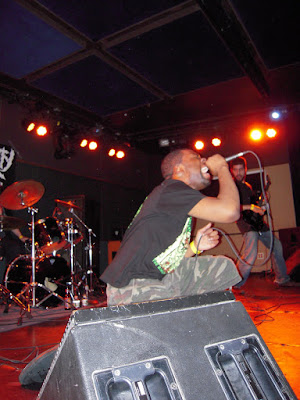 Between sets, I picked up Humanity Falls' Promo 2009 CD. While perusing the merchandise, I realized there wasn't a single item for the next act, the mysterious Ancient Wound. When the three unassuming band members took the stage, the crowd reacted with a rowdy cheer. Evidently Ancient Wound are a legendary, well-kept secret. I can't believe I've never heard of the band before. 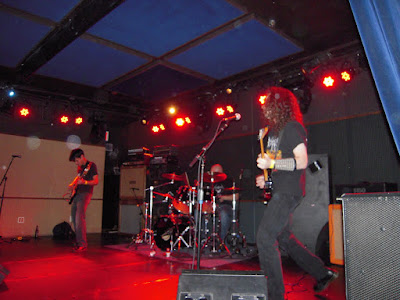 Ancient Wound launched into a preposterously awesome thrash instrumental. When the second song kicked in with screamed vocals, I finally made the connection; this band must have stepped off a time machine from 1985. They sound exactly like Seven Churches era Possessed, and that is a wonderful thing. Everything about Adam Hell's delivery seems genuinely archaic. The band's madly thrashing proto-death sound is fantastic. 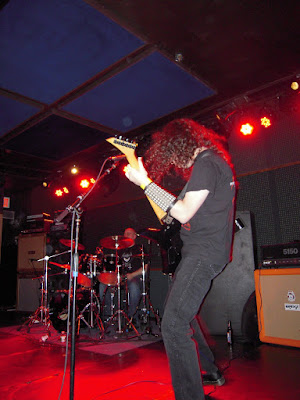 This massive metal experience was enhanced by near-perfect sound. The guitar was crystal clear and Pat Sorcerer's prominent bass was perfectly audible. Each song delivered compelling riffage with the utmost speed. I couldn't get over the way Adam Hell would introduce the songs in a mild mannered voice, explaining how each track was about zombies, demons, or Satan. His stage presence reminded me of Ronny James Dio, albeit with a guitar in hand. The crowd was going mad during Ancient Wound's set. Colin Marston of Krallice stood directly in front of the stage throughout the performance, headbanging wildly. Awesome. 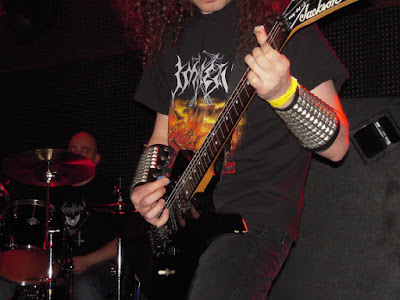 I noticed around this point that the venue was getting packed. Unbelievably, I think almost half the crowd was female. Not only that, there were many extremely young females in attendance. I still haven't reasoned this out, but perhaps Krallice have some sort of teen-idol status in Williamsburg? Maybe Danny Lilker has some bestial attraction I don't understand? 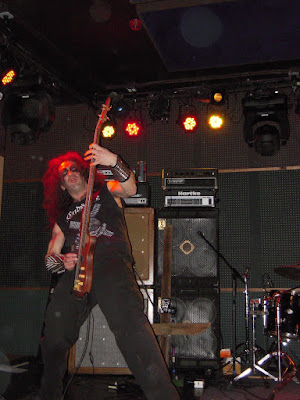 I hadn't taken the opportunity to get acquainted with Crucifist's material. Now I know I was remiss. The band have distilled the raw roots of death metal, doom and black metal to form a wickedly powerful moonshine. A corpse-painted Danny Lilker (of Brutal Truth and S.O.D. fame) came out on stage to join guitarist John Gallo and drummer Mike Waske for a short instrumental ditty. Ron Blackwell walked out in a long robe and proceeded to scream bloody gore. 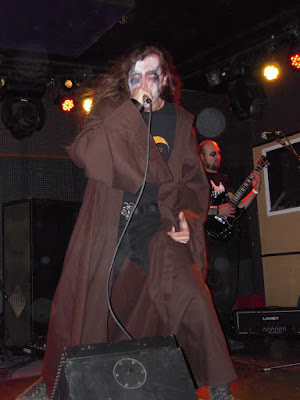 Crucifist were quite an experience. Ron Blackwell is seriously charismatic, and the crustified tunes sounded distinctive without any prior listening. The sound, however, started to get a little bit too loud. Surprisingly, Danny Lilker's bass wasn't very high in the mix. Ancient Wound found the sweet spot for volume, but Crucifist were in the red. It didn't really matter; this band's material probably sounds better when your ears are bleeding. You can't go wrong when you have a song entitled “Skull-Smashing Face-Ripping Death.” 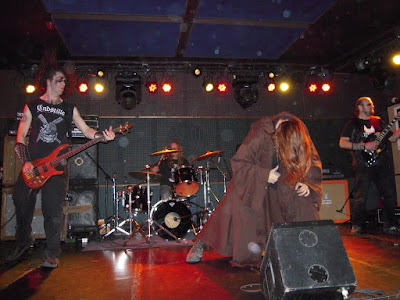 Justina Villanueva (NYC metal photographer-in-residence) gave me the heads up that Krallice would be playing some new material. This was my first time seeing the band live, and I was hoping for a transcendent metal experience. Unfortunately, the sound wasn't fantastic, so that didn't happen. 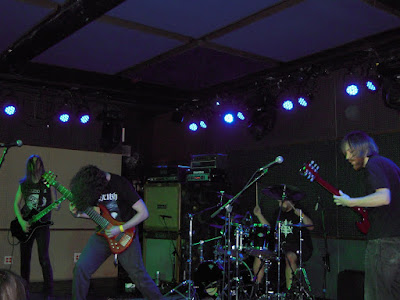 Krallice ripped straight into some new material that doesn't seem to have vocals yet. The PA was extremely loud, and I had a very hard time distinguishing the guitars. Colin Marston windmilled while tearing through the riffs with ease. Mick Barr stood facing stage left instead of the crowd, as he's known to do. The dude looks completely harmless, but when he lets loose on vocals he exhales demons of madness. 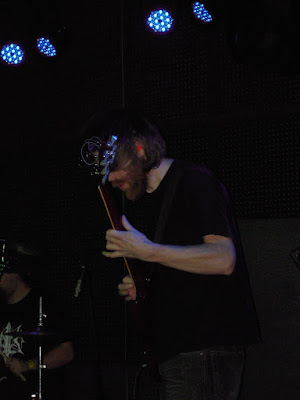 I wanted to be able to sit back and soak in the music, but I spent most of the time focusing on the tunes and trying to discern the melodies. Don't get me wrong; this was an amazing performance. But ultimately the live Krallice experience didn't evoke the same sense of immersion that their recorded work does. In the end, the most impressive part of the set for me was the rhythm section. Lev Weinstein is unbelievable on drums. The guy creates a perfect rhythmic storm that begs for a bigger venue with better acoustics. Nick McMaster's bass sounded great, and his vocal delivery seemed to bring the band back to earth. Seeing Krallice live just made me want to see them again with better sound. 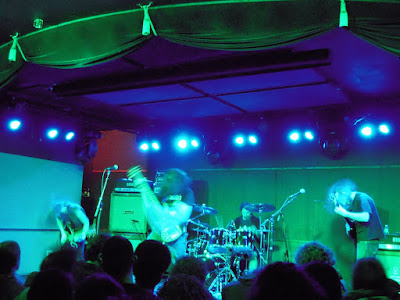 The large crowd was enthusiastic, and there was plenty of hair flying. An actual pit broke out twice. During the last song, things got particularly rowdy. When Krallice unplugged, the pit took a while to calm down. Before it died, I caught a glimpse of Ancient Wound front-man Adam Hell streaking across the floor with a beer raised high. Kick ass.
Ancient Wound Crucifist Humanity Falls Krallice The Knitting Factory