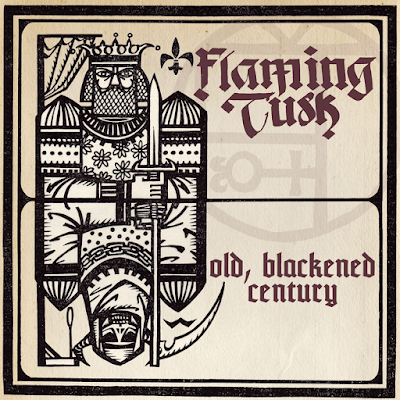 The Flaming Tusk Myspace page lists them as “Metal/Metal/Black Metal,” but that equation can't possibly be accurate. In fact, dissecting the influences here may be computationally intractable, and that is a wonderful thing. Flaming Tusk have a truly unique sound.

My first point of reference on Flaming Tusk has to be Enslaved. I get the same satisfying sense of weirdness that emerged the first time I listened to Mardraum. Those feelings of curiosity, groundlessness and amazement are rarely invoked for me by metal these days. Old, Blackened Century has violently appropriated my attention, much like Cobalt's Gin did last year.

I'm in the middle of reading Richard Dawkins' incredible “The God Delusion,” and I've got Darwin on the brain. Flaming Tusk's music is so interesting that I have to wonder at the evolution of their sound. Tracks like “Anathema” possess the riff aesthetic of early Mastodon, but with more focus on the NWOBHM melodics (a la “March of the Fire Ants.”) At other times, I get the demented vibe of recent Darkthrone. The hoarse guitar tone and strange rhythms evoke hardcore in ways I can't articulate. A more well-rounded listener might be able to delve into the hardcore lineage of these tunes.

Old, Blackened Century never moves faster than a mid-paced lumber, with no blasting in sight. The drumming is perfectly adapted to the odd rhythms and is curiously uninterested in speed. The lack of velocity intimates that there must be some doom influence at work, but I can't pin that down.

The two guitars rarely seem to agree, and it sounds fantastic. There are all sorts of memorable riffs in here, along with some nice pseudo-bluesy and bizarre solos. The guitars don't sport spectacular crunch, but the product is still satisfyingly heavy. These riffs will almost certainly burn themselves into synapses and make your head bang. The fully audible and driving bass is integral to the songs. The excellent bass sound shows how great the mix is; I love the production. It doesn't sound like there are any overdubs on the guitars, adding to the pleasantly undercooked atmosphere. 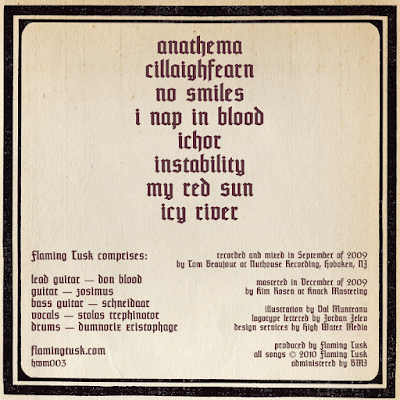 The charismatic vocals come from the Grutle/Abbath school of froggery, with some deeper gurgling to be found throughout. After listening to this a few times, my throat starts to hurt out of sympathy for the shredded vocal chords.

The songwriting is superlative and certainly one of Flaming Tusk's greatest assets. The lyrics are great; it's typical death metal imagery, but flavored with a poetic sauce and hints of hardcore disgust. When was the last time you heard someone scream “HO CHI MINH KISSINGER” in the middle of a black/death metal song? “No Smiles” is a fucked up and enthralling tune; its 8 minutes just seem to fly by. Most of the tracks are long, but diverse. Amazingly, nothing sounds out of place here, and the songs manage to hold my attention well.

My only small gripe with Old, Blackened Century is that the last track, “Icy River,” kind of degenerates into a free-form jam. While not a big deal, it sufferers the same lack of focus that pervades the most recent Enslaved albums. Thankfully, the cool hammered-on riff that develops part way through stops the song from completely losing me.

Flaming Tusk are distributing their album through Bandcamp, the same way From Exile did last year. For all the discussions going on about digital distribution of albums, I think Bandcamp is the only site doing it right. First off, you can listen to a stream of the entire album. Then, you can download the album and pay whatever you want, with no minimum. This completely eliminates the desire someone might have to seek out an illegal download of the album. Lastly, and most importantly, Bandcamp allows you as a consumer to choose any format for your download, including lossless (FLAC). This is the only way I'll spend money on a downloaded album – I can burn it to CD with no loss of quality and convert it to any compressed format I desire (I use the open source OGG format for portable music). So congratulations to Flaming Tusk, you chose your distribution channel wisely, and I paid $10 for your album.

86/100
(The only appropriate score for a band from my homeland of Astoria, Queens).