Posted by atanamar April 20, 2010
Sunday turned out to be quite an evening. Every band on the bill was a metal revelation, and the consistently excellent sound raised my opinion of Europa considerably.

I made the drive down to Brooklyn accompanied by the sounds of Maiden's Seventh Son. I assumed I was arriving fashionably late by showing up 45 minutes after the listed door time, but things turned out to be quite different from my last visit to Europa. Evidently the venue is a lot more laid back when there isn't a dance club evening set to follow a show. The doors were locked and a few folks stood around outside the venue in the cold, wondering what was going on. We could hear the evidence of a sound-check going on inside.

I was spotted by the ever-present Justina Villanueva, who apprised me of the situation. Things were simply running late. I got to meet Krallice's gracious drummer, Lev Weinstein, and subsequently, I was introduced to Laurie Sue Shanaman and Ross Sewage of Ludicra. They're very cool folks. Finally, the doors opened up, and we were let into the second floor venue. I honed in on the merch table (manned by Aesop Dekker) and was able to score a Ludicra shirt and a numbered print of the gorgeous tour poster. 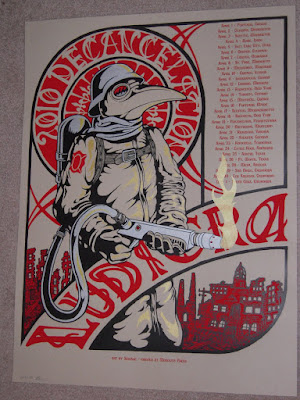 Brooklyn's Atakke took the stage first and ripped into a fantastic set of thrashing madness. I've never seen these guys before, but the band were incredibly tight. The first thing that popped into my head was Sepultura (pre-Roots); you can't go wrong there. Atakke is the kind of band that can sell you simply on their live show. Vocalist Chloe Puke managed to elicit quite a response from the crowd, which was rapidly filling in. I believe the proper response to such primal metal is uncontrolled windmilling of manes, and that was the result. The tunes were discernibly riff-driven, and the rhythm section drove home the sweet thunder of speed metal with ease. I was extremely impressed. The band have a couple of EPs available. If either were available as a CD (I still haven't taken the vinyl plunge), I would have bought it on the spot, but none were to be found at their merch table. I'll definitely be keeping an eye out for Atakke in the near future. 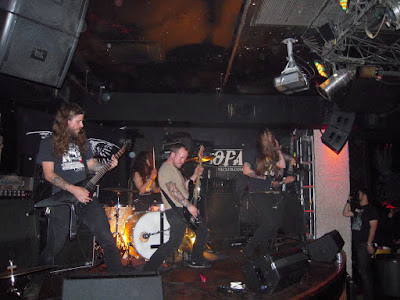 Castevet, freshly signed to Profound Lore, were up next. I've only heard one track off their upcoming full length, Mounds of Ash, but I was really looking forward to this set. Castevet sell a rhythmically unique brand of black metal that evokes Krallice but is imbued with a fascinatingly dissonant spirit. The three-piece did not disappoint. Guitarist and vocalist Andrew Hock threw his whole being into the performance. 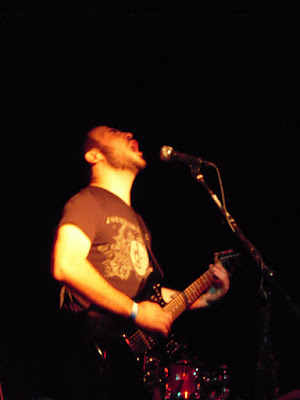 The music was sharp and enthralling; the essence of these tunes came across loud and clear in the live setting. I was particularly blown away by the strange shapes Andrew Hock was creating on the fretboard with his fingers; he seemed capable of absurd stretches that would break the average man's hand. Drummer Ian Jacyszyn and bass player J. Scott steered the machine gun rhythms all over the map with commanding ease. It was a really great set that has inspired me to go pre-order their upcoming album with a quickness. Jeanne Fury appeared during Castevet's set to round out the usual suspects. Thanks to Justina's boundless metal social-network, I was also able to meet Krallice's Mick Barr and then Sean Gresens of Metal Injection. Again, very cool dudes. 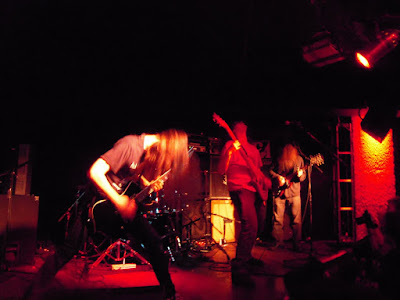 Krallice set up quickly and dove straight into the deep end of their frenetic black metal attack. My first Krallice live experience hadn't lived up to my expectations, mostly due to the sound. On this night, the mix was perfect, and with a spot directly in front of the stage, I found what I was looking for. This was a seriously amazing performance; the band was able to conjure up the atmosphere that keeps their albums in constant rotation for me. 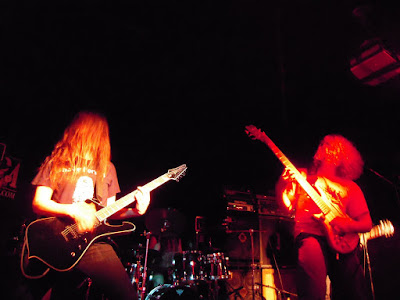 Krallice's music feels like being sucked into a deep ocean whirlpool. Colin Marston and Mick Barr showed off the bizarre synchronicity of their intertwined riffage without ever slowing down or breaking a sweat. Up close, you can also witness the skill with which Nick McMaster insinuates himself into the mix. Lev Weinstein holds it all together admirably and again sounded even better than on the albums. All told, this was a powerful and fucking mesmerizing spectacle. I highly recommend checking these guys out if they make it to your town. 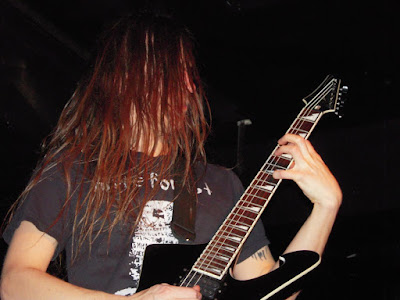 Finally, Ludicra began to set up, and a strange giddiness could be felt in the venue. It seemed like a good many people had waited a very long time for this moment. Of course, these guys and gals don't act like rock stars, but they certainly had that aura on this night. By some miracle, I ended up directly in front of the newly resurrected John Cobbett. 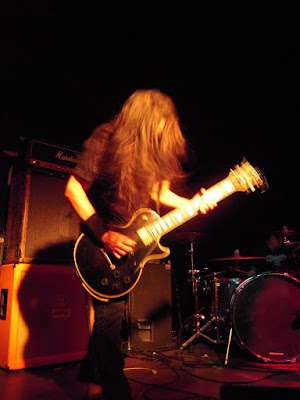 Ludicra launched straight into “Stagnant Pond” off of The Tenant. It was an interesting and laid-back way to start out the set. It was immediately evident that the sound was perfect. Laurie Sue Shanaman is a sight to behold on stage. From the first moment she tore into the vocals, she seemed to be suffering a full bodied exorcism. Heads were bobbing all around, but it wasn't until the acoustic break and blast-beat inflected solo that the crowd reacted with full physical force. 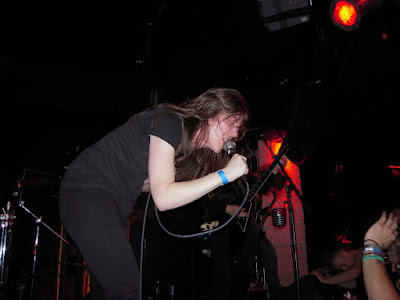 “In Stable” set off a modest pit and produced a good amount of flying hair. I spent most of the song marveling over John Cobbett's efficient fretwork, in between bouts of headbanging. Christy Cather was similarly impressive in her look of ease while thrashing out the riffage. It wasn't until she jumped in on vocals that the demonic force took over her body. Across the stage, Ross Sewage was silhouetted by a strange light for most of the show. As a result, his glowering facial expressions were magnified and became a central part of the atmosphere. 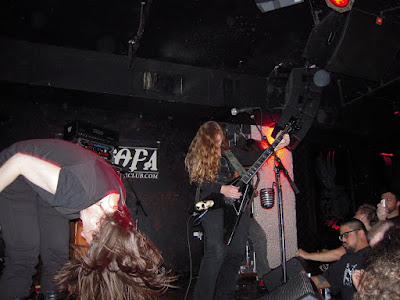 The set was relatively short but sweet. Aesop Dekker was phenomenal behind the kit, despite the fact that the drums seemed to want to move all over the stage. Although I snapped a picture of the setlist (scrawled on a torn paper plate), I'm still not sure what some of the songs were that Ludicra played. In the end, it didn't really matter – their performance was hypnotic. Judging by the ecstatic reaction of folks around me, people were having a really good time. “Veils,” from Fex Urbis Lex Orbis was particularly awesome, and the band was convinced to play an old song for an extremely long encore. 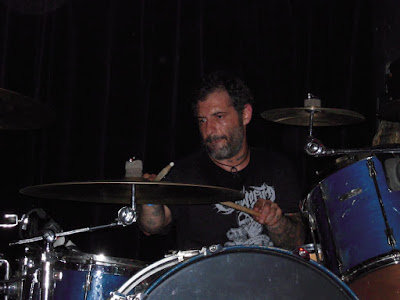 As I stated earlier, it was a fantastic evening of metal. To keep my eyes open for the long drive home, I celebrated the sounds of San Francisco and blasted Slough Feg's Hardworlder. But it wasn't necessary – the adrenaline didn't wear off for a long time.

The rest of my persistently amateur photos can be found here.
Atakke Castevet Europa Krallice Ludicra