Posted by atanamar June 08, 2010
It pained me to miss this show last night, but luckily Zosimus of the mighty Flaming Tusk was there for the action. He kindly agreed to write up the show for this blog and took some great pictures as well. So without further ado, the first ever guest post on Mindful of Metal: 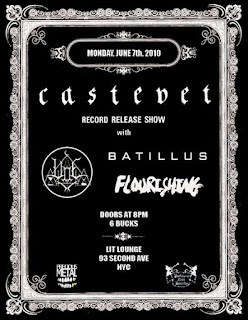 Atanamar would have liked to have been at this show himself, but as the will of Satan saw fit to strand him in unholiest Denver (never mind the megachurches), I was elected to take his place and report on the night's events at the great and terrible Lit Lounge.

Curran Reynolds, proprietor of the weekly Precious Metal showcase, put this bill together as a birthday present to himself and received the best gift a promoter can hope for: a packed house. I've never seen so many people at a Precious Metal night. Not even the ones I've performed at, YOU FUCKERS. Curran's immense personal popularity aside, I think this might have had more to do with the show being Castevet's release party for their new Profound Lore disc Mounds Of Ash, plus the fact that all the bands on the bill have been copiously babbled about on the internet and in print of late. And deservedly so. Flourishing kicked off the show without bothering to announce who they were because I guess we should just know, or it's not cool or metal or something to be all HEY WE'RE FLOURISHING AND THIS IS THE SHOW NOW etc. Jerkasses. Anyway. Flourishing plays grindy techdeathy jams with all the thrust and drive you'd want from that sort of thing. Whatever the guitarist was playing was raging, if somewhat indistinct during their grindier moments, and the bassist was making attempts to provide the onslaught with a center, but the real star of the show with Flourishing is the drums. Dude is a machine, and I got the impression I would have had a pretty good time even if he'd played the whole show by himself. Flourishing has a cool t-shirt. Local boys Batillus were next up, and these dudes understand heaviness. In the grand tradition of their forebears, they play their psychey doomsludge through Orange, Green and Sunn amps, and I'm pretty sure I never heard any tone that could be referred to as “treble” at any point in their set. Oh, except from their psychotically possessed vocalist/synth artist frontman, a guy with waist-length blonde dreadlocks like so many pallid tentacles of a trench-dwelling sea monster. He won my heart when he went up to scream maniacally in the faces of two drunken douchebags down in the front of the crowd, and they were actually startled. Batillus play some really creepy, creative, interesting stuff (guitar parts that manage to be both minimalist and crushing), and their live show brings it hard. The girls seem to like them, so that's rock 'n' roll. Second to last came Woe. Woe does exactly one thing: they play furious, blurry black metal. They are good at it, if you like that sort of thing. Woe's frontman is an angry guy. At times I couldn't tell if the drummer was losing the thread a bit or not, but most likely it was the usual drift that comes with playing crusty black metal beats all the time in a less than sonically perfect environment. I did appreciate that the bassist was clearly audible to contrast with the mushy roar of the guitars. I wish Woe had something more distinctive about their sound or songwriting that would move me to say more about them, but they're kinda one-note. On the rare occasions that they dropped into something approaching a riff with a groove I began to dig them, but it's hard to do that sort of thing very much and still be a properly bestial black metal band, I guess. This one chick was doing something that I guess you'd call “dancing” through their whole set, so I will cop to possibly being in the unmoved minority. Finally it was the belle of the ball's turn on the floor, and the crowd swelled appropriately. Castevet are pretty cool. They have a gooey black metal core, but it's wrapped in a crunchy shell of interesting riffs and melodies with some creative song structures. In the past I've likened them somewhat to Krallice, and while both bands exhibit what I've come to think of as “literate NYC black prog” (aka beardiness?) Castevet definitely sounded like their own entity at this show. They're a three-piece, but they've learned how to sound immense; each of the instrumentalists has carved out a sonic space for themselves, and they inhabit those niches with confidence. The guitar tone is killer (okay, so I'm a bit of a gear nerd, fuck off) and, like with Flourishing, the drumming is excellent. I think the band's parents were at the show.