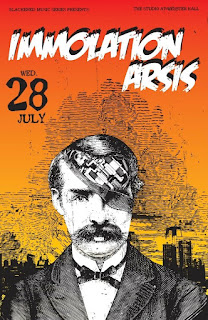 These are the kind of performances I live for; the shows where perfect sound, incredible feats of musicianship and intimate settings let us step through the looking glass into the meaning of metal. The entire evening didn't entail such glorious suspension of disbelief, but Immolation were certainly true to their name on this night, incinerating the souls of the fans who came out to celebrate their 25th anniversary.

Thursday was my first visit to this underground appendage of Webster Hall. It appears to be a venue capable of both excellent sound and unfortunate muddiness, completely at the whim of the band's equipment and of the person behind the sound board. I came out to the show alone, but the venue was packed with familiar faces. Ross Dolan and Bob Vigna were hanging out at the Immolation merch table speaking with friends and fans. I chatted with them briefly while picking up a T-shirt. They're incredibly friendly guys. 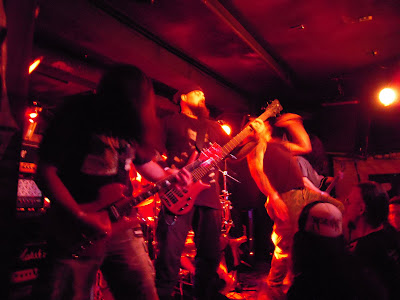 I'd never heard of Disma until they were added to the bill at a late date. New old school death metal is not an instant win for me; many proponents of this resurgence simply do not interest me. Disma, however, have got the extra sauce that gets me drooling. Before the show, I checked out their 2009 demo, The Vault of Membros and was extremely impressed. I only found out later that the band had signed on to record an album for Profound Lore Records. Somehow that came as no surprise. 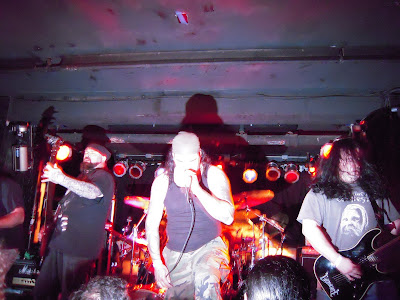 Disma is comprised of seasoned veterans who served in bands like Incantation, Funebrarum and Goreaphobia at one time or another. Imagine what Incantation would sound like if they'd ever recorded at Sunlight Studios – it's not hard to conjure up a vision of the grisly death that will follow. In person, these songs really win, with excellent and memorable rhythms to accompany compelling riffage. 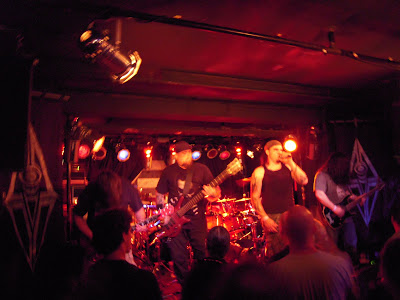 The audio mix was not optimal for Disma. The guitars were too quiet, blunting the edge of their sound. Although the venue was decently cooled, it was clearly a wretched steam bath up on the stage. Vocalist Craig Pillard seemed to be melting before our eyes. Perhaps the heat was also affecting the rest of the band; apart from some brief headbanging, Dimsa were largely static on stage. I don't think the crowd really cared; there was quite a buzz about these guys and everyone seemed quite engaged by their set. Keep an eye out for Disma in the near future.

Next up were Arsis, whose appearance on this bill was only a little bit strange. I think we can concede that A Celebration of Guilt is a landmark album which I personally still enjoy quite a bit. My interest in Arsis has diminished with each release, however. The crowd seemed split between folks who were rabid fans of the band and a larger group who were mostly indifferent to their performance. I haven't seen Arsis live since they toured with Enslaved in 2007, so I was fairly interested in seeing them play. 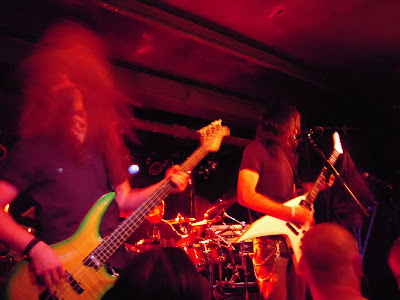 The mix was wretched for Arsis' set; the guitars were buried behind the drums and vocals. And really, who wants to watch an exhibition of guitar wizardry when you can't hear the guitars? Some people seemed to be enjoying themselves, but I had to leave the room. It was a shame. 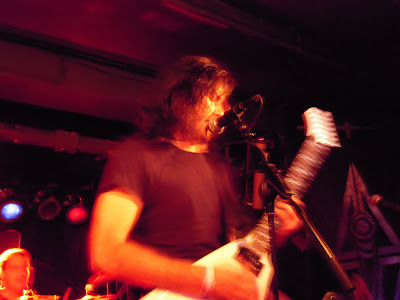 By this point I was in absolute terror that the awful sound would bleed into Immolation's set. As they took the stage I realized that a new face had appeared behind the soundboard, so there was still hope. “The Purge,” the first proper track off their new album, started off the set. The mix was complete perfection; the guitar amps were perfectly mic'd, with the drums and vocals in perfect harmony. Win.

I'm a huge fan of Majesty and Decay; it's certainly one of my favorite albums of the year. The band played a good number of tracks off it, and the crowd was pleased. I was lost in completely blissful headbanging throughout the set. A few folks tried to get pits going, but for the most part we stood there like an enthralled mob of head-bobbing fools.

It's been said before, but Bob Vigna is ridiculous on stage. He plays his instrument like he's performing a bizarre guitar mating ritual. He mouths the words to each song while Ross Dolan roars. Besides demonstrating an endearing eccentricity, these mannerisms really show how much this core duo have communed to give these songs meaning. 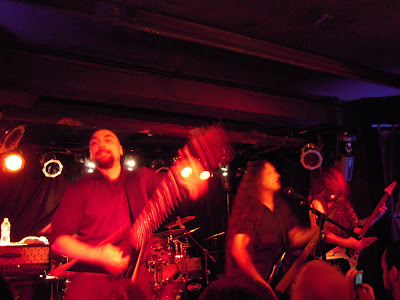 Somewhere along the way I realized the dim lighting was going to defeat my negligible photography skills, so I decided to shoot some video. This worked out great for one track, but turned absurd for “Father, You're Not A Father.” As you can see below, I got caught in a mosh. This song really sent the crowd into fits. The band played two tracks off Dawn of Possession; first the obligatory title song, and then “Burial Grounds.” The latter song also started a decent pit.

Steve Shalaty was incredible behind the kit. I loved his drum work on the new album, and those rhythmic accents were appreciably audible in person. It's absurd how well oiled Immolation feels in a live setting. That perfection really manifested for “Unholy Cult,” filled with demented cadence and intricate corkscrew riffing.

“Passion Kill” closed out the set with thunderous consequence, driving that righteously perfect riff home into our cloven skulls. With much pain in the neck, I left the venue sated. The only omission I'd note is the lack of tracks from Here In After, but I can't really complain. This was one of those life-affirming shows that keeps me alive to grind another day.
Arsis Disma Immolation The Studio at Webster Hall